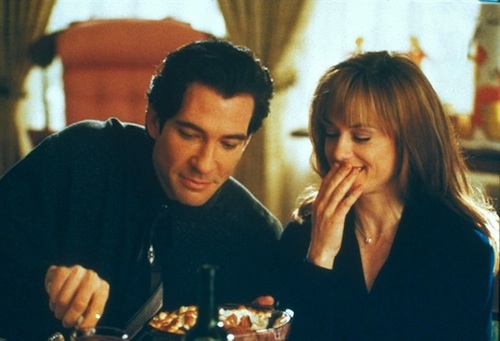 So here's the thing; my crush list is kind of EPIC. By that I mean, there are a lot of celebs that I find myself dreaming about, and my dreams aren't limited to just the actors, they extend to specific characters they've played on screen. I felt compelled to share them with y'all* just in case you need some ideas for silly romantic comedies with men that will make you swoon.

Dylan McDermott as Leo Fish in Home for the Holidays
It’s probably hard for everyone to erase the image of McDermott crying while masturbating in American Horror Story—but if anything can get it out of your mind, it’s his sweet, ruggedly handsome Leo Fish in one of my favorite holiday movies of all time. Leo pursues a sullen Holly Hunter with respect, romance, and just enough smoldering sexiness. There’s a bit in a coffee shop where he explains to the young clerk why he needs him to stay open long enough to buy this girl a cup of coffee that’s so endearing it’s insane, and when she rebuffs his romantic advances, I guarantee you’ll scream at her—as if she can hear you. I don’t want to ruin anything for those that haven’t seen it, but the ending. MYGODTHEENDING. 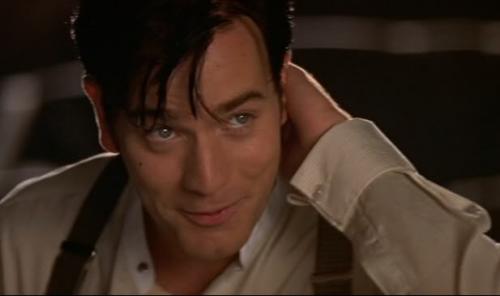 Ewan McGregor as Christian in Moulin Rouge!
I know, I know – this one is OBVIOUS. I mean, who wouldn’t want a sparkly-eyed, tousled-haired Ewan singing his heart out in an attempt to lure you into bed? And I swear, the second Christian belts out that first “My gift is my song…and this one’s for you”, my heart jumps right out of my chest and I start hyperventilating…and I don't even like musicals! Christian’s a broke, rebellious writer who lives for the pursuit truth, beauty, freedom, and above all, love. And he’s absolutely adorbs and swooneriffic throughout the whole film—even when he’s hurt and (rightfully) really, really, pissed. Add in the whole costume-drenched Technicolor fantasy aspect, and I’m so gone. Plus, that man can really wear a Top Hat, if you know what I mean. And I think you do. 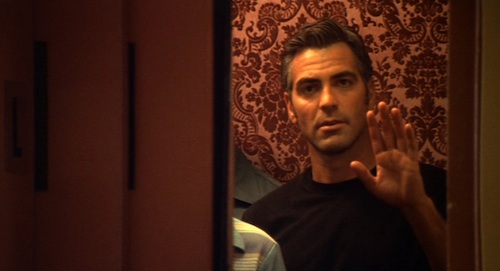 George Clooney as Jack Foley in Out of Sight
Clooney turns his usual handsome charm on in this Elmore Leonard adaptation about a serial bank robber who breaks out of prison and manages to romance an FBI agent (Jennifer Lopez) while holding her hostage in the trunk of her car (and referencing the movie Network. I mean COME ON! It’s like they wrote his character just for me!). Far-fetched, right? But of course George makes it look effortless—how is this guy so cocky and adorable at the same time? Everything he says to Lopez is dripping with sincerity, and I still say their sex scene is one of the hottest things on screen: slow, languid undressing, laughter, longing glances…just the perfect amount of tension. I know Clooney is sexy in plenty of movies, and while I’d also choose to bang Seth Gecko, I totally marry Jack Foley—diamond thief or no. 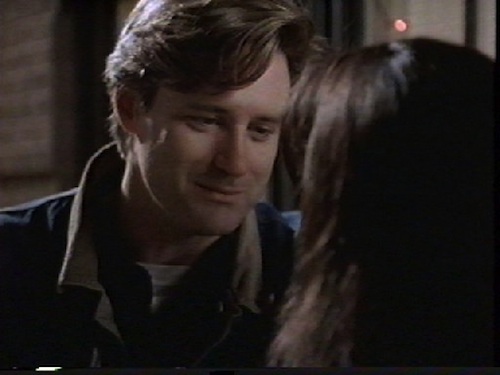 Bill Pullman as Jack Callaghan in While You Were Sleeping
This ridic romantic comedy is about a subway token taker (Sandra Bullock) who gets mistaken as the fiancé of a man she saves from being run over by a train—who ends up in a coma. His family immediately accepts her as one of them, and that’s when brother Jack shows up. Aw, Bill. How I love your shaggy fall-in-your-face haircut. And your crinkly, earnest eyes. Jack is one of those perfectly disheveled artistic characters (he’s a furniture maker trying to break away from his father’s estate resale business) that are also wickedly smart and funny—the scene where he’s explaining what “leaning” is to Sandra Bullock’s Lucy is hilarious, but also sexy somehow. And even though it takes him forever to admit he’s in love with her, when he does, it’s nothing short of amazing. 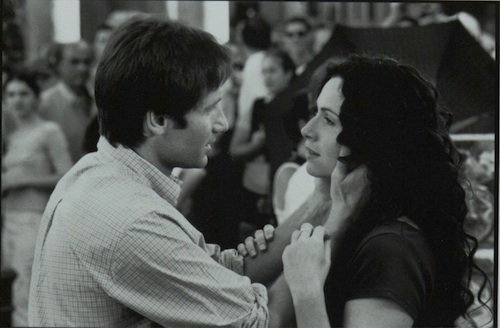 David Duchovny as Bob Ruland in Return to Me
I was a faithful watcher of The X-Files, and never found Duchovny appealing until I saw him as a widower in another really ridiculous romantic comedy (apparently I only find a weeping, wrecked DD hot – I'll have to talk to my therapist about that one day). The gist is that Bob’s wife gets in a car accident, and her donor heart ends up in a sassy waitress (Minnie Driver), whom Bob finds himself attracted to. Bob is a rich architect with a social conscious and the sweetest dog in the world, but most importantly he’s a down-to-earth guy with a sense of humor and romance…and every time he chokes out the line, “I loved Elizabeth. I always will…but I ache for Grace.”, I melt into a puddle and DIE.

Patrick Fugit as William Miller in Almost Famous, Patrick in Saved, and well – pretty much everything else he’s in. Why? Because he’s ADORABLE.

*Next time I promise to play the Bang, Marry, Kill game.