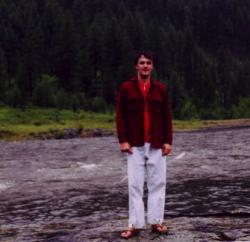 Mt Eerie: Were we at the Vera or Japanacortes?

As the evening set over the Anacortes port, darkness overtaking the sky, nautical sounds filled the air, the low blow of foghorns moaning over and over to each other. When the sky finally succumbed to the night, a soft lullaby voice carried us with an acoustic accompaniment through the landscape of diverse Washington: the rainy, foggy mountains heavily blanketed in forest; rolling, sleepy waves coming into shore; tree tops swaying in the heavy storm winds; moon lit docks extending into the bay. As we followed this adventure led by the soothing music, a chill in the air from the atmospheres bit our skin.

But the cold air wasn't from the atmosphere, rather from unnecessary air conditioning. We weren't actually on this trek across the Washington terrain, it was just being projected upon a large white canvas spread across the wall. Those weren't ships signaling warnings in the night air, only deep guitar loops played back through a troop of amplifiers. This was actually just the entirety of one song masterminded solely by Phil Elverum, who's performing under the name Mt. Eerie these days. The whole room was in a trance as the song ended, the nearly sold-out audience unsure if the journey was done or not, delaying their applause. Of course, claps erupted once Phil gave the cue.

The rest of the set was played in near darkness, everyone sitting on the floor eagerly listening to every note. The thought of the cold blustery night outside made the haunting music ever more perfect. Performing solo, he took up only a minor corner of the stage, almost hidden behind the monitor booth. Then abruptly he announced he was done. Protest rose out of the crowd, "more more!" we all shouted. Acquiescing, he continued playing his songs acoustically. A girl later at the bus stop gushed to me that he played a song she requested prior talking to him one on one. He shared a few stories with us, informing us he was leaving for a stint down the West coast. Here in Washington, if anyone is appropriate to be a tour guide of the vast and varied expanses, Phil Elverum is definitely qualified for the job.

If this concert wasn't taking us across mountains and beaches, it was definitely taking us to an imaginary place — Japanacortes. This cheeky name was coined from the fact the performing musicians were either from Anacortes, WA or Japan.

Anime isn't the only animated thing coming out of Japan; the Moools singer Yasuaki Sakai fluttered upon the stage with great enthusiasm for his stance as a rocker. Aggressively conducting his fellow band mates, it was unclear whether this was a farce or he truly was a hardass. At least their drummer Masato Uchino found amusement in his shoeless leader. A great moment was created when a silent break was coaxed down by Sakai, only to be broken by a haphazard rendition of the opening to "My Sharona." With his broken English, Sakai charmed the crowd as he attempted to give many thanks for the turn out.

Fellow Japanese-turned-Washingtonian PWRFL Power played before. This boy was made to be an entertainer. Fidgeting while introducing himself, Kaz was a bit nervous as he explained to the crowd this was his first time in a long while playing on electric rather than his standard acoustic. He's very deceiving, seemingly endearing until his lyrics busts out with calling a chick a slut or having an entire song about falling in love with a boy, who consequently breaks his heart. Fuck never sounded so out of place as it does when coming out of his spirited voice. Which is all the more reason his songs are hilarious.

Openers The Oregon Donor came across to me as a band suiting for a younger teen audience, especially with adorably nerdy lead singer Christopher Edwards. Sure enough, as soon as the thought crossed my mind I looked over and two peppy teen girls were swooning in the front row.