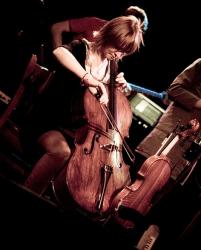 Standing alone, strumming an acoustic guitar, Tom Brosseau's appearance and sound set him off as if he missed his decade. Flaxen hair combed neatly to the side, light blue cardigan sweater buttoned fully, unassuming look all around, I could imagine his face on a shelf of dusty 45s next to other classic country greats of the late 1950s and 60s. His voice was captivating, one you'd want to personally serenade you. He has a soft lilt, not quite a southern diction, with which he spun the words through the air; I half expected him to start yodeling. For the near 45 minutes he played, there was at least a quarter of the slowly filling Neumo's crowd also intrigued by Brosseau, towering tall above us, his folk country conjuring up images of lazy afternoons on the ranch, his lyrics telling tales of times on the river or lost loves.

It was really unfortunate the other three quarters of the crowd were too busy talking. Brosseau's set would have been better suited for a more intimate setting, for a crowd with all appreciators. He let on he was feeling this too, as he asked the crowd, "Is there anyone in here familiar with my songs? I'll play one if you request," resulting in at least more than a dozen cheering support. His solicitation for requests resulted in other musician's songs being shouted, but he laughed it off and played a different tune. One cover was worked into his set, an Elliott Smith song, rather fitting for the four-year memoriam of the beloved fellow acoustic musician.

It was during his final number that Tom whipped the rest of the audience into attention. Pulling guitar aside, he commanded the microphone with an a cappella outro, full of emotion, showing full range and power. Then, he politely thanked the crowd and stepped off. I was sold.

Hunger and a tip-off from my friend who attended the same show the previous night in Portland sealed the decision for a bite to eat during middle band Talkdemonic. Walking back to Neumo's replete, who was this tall, dark featured blonde man we spot on the corner, but Tom Brousseau himself! My friend and I introduced ourselves and discovered that the humble demeanor extends beyond the stage. He talked with a small-town genteel manner, asking more questions of us than we of him, very interested in what we had to say. I discovered he's from a town in North Dakota just 30 minutes away from the town my dad and his siblings grew up in. 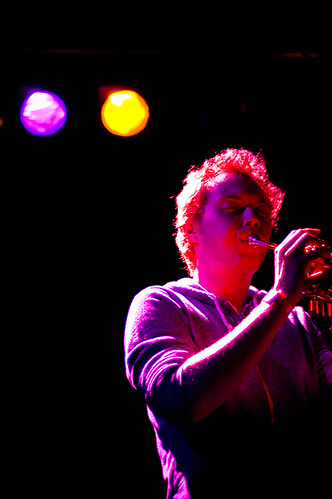 Rushing inside, my friend and I realized the headliners we were anxious for were still a half hour away from show time. Then, as the minutes ticked by, they became ten minutes tardy, prompting a few of the ever-zealous Seattle fans to yell, "Hurry!" It was past midnight after all. The wait was completely worth it, as the small army of musicians who make up Múm took the stage.

Múm [pronounced Moo-om] is quite quickly and widely noted as an electronic outfit, but I think they're just plain from another world (they're actually from Iceland). Like the soundtrack to an elfish world, twinkles filled the air, ethereal vocal melodies bounced off the electronic foundations, recorder solos were featured like most bands would showcase a guitar. Perfectly placed bleeps and bloops filled in gaps set off in the background, almost too perfect. From behind half of the audience, it was sometimes indistinguishable if what was being heard was actually being played or electronically prerecorded. Tilting my head around the crowd, I could quickly be reassured, for the majority, all was being created live. Instrument after instrument was picked from the stage floor: harmonica, recorder, cello, melodica, violin, kazoos even.

Front and center was cellist/vocalist Hildur Gudnadottir, encapsulating the essence of the band by herself. One tiny ponytail set off the crown of her head, she bopped to the music in a playful, adolescent glee, scrunching her face to accentuate words while singing. No wonder the guys in the band put her in main focus. She was the poster child for Múm's enchanting innocent aura their music carries. Thick accent covering her words, she thanked the crowd many times over, sharing how wonderful it is to be in America during Halloween. "We do not have this over in Iceland. You walk down street here, and oop! there's batman on bicycle!" The keyboardist/bassist was not as fluent in English; rather, his twice turns at speaking in the mic resulted in the crass Seattle crowd yelling, "What!?" No matter, the music kept on.

Bouncing beats and resounding musical tapestry made for the bulk of their set, which continued until well after 1 AM. Once, it was announced apologetically two slower songs were to be played, to which the crowd cheered anyway. I don't think anyone really cared what was to be played, so long as they were playing it.

The space between the end of the set and their encore was over in hardly a blink, Múm barely left the stage. And as they really made their exit, their magic sparkled in the atmosphere and our ears long after. 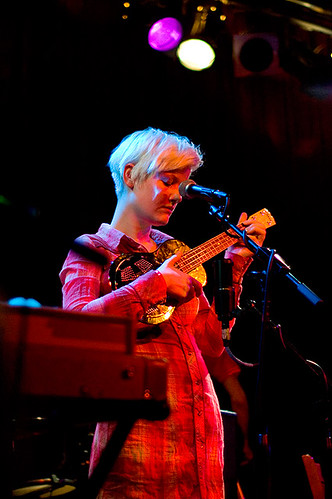 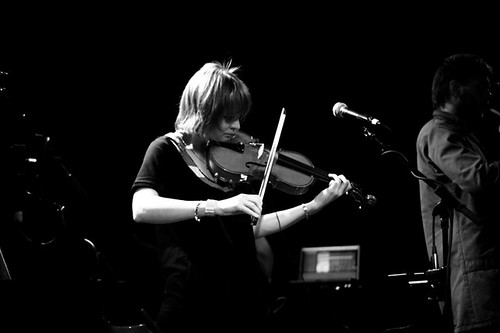