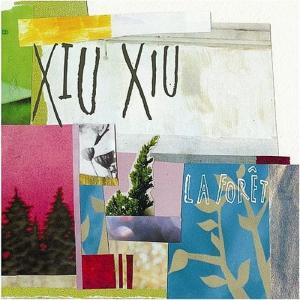 Ah, nothing like 2 days of quality use of a laser to clear one’s head. Of course, it doesn’t explain the pair of odd dreams I had last night. The first was obviously a rip-off of 28 Days Later (like how I accuse my brain of ripping off ideas?) where very quick and agile zombie people were going around infecting the rest of us and unlike many dreams/movies, the star (that being me) lost. However, the most disturbing thing about it was the moment I was getting offed by the zombie, the only thought in my head was “Oh well.” A very ‘pot of petunias’ sort of moment. It seemed oddly fitting that I would get “Muppet Face” by Xiu Xiu for my return Spin today as I’ve always found that Xiu Xiu’s music borders on being the soundtrack to my dreams/nightmare (mostly the later) – and “Muppet Face” is no exception (although it is fairly tame compared to some other songs by the band). The disconcerting, trilling bells, bizarre references to things smelling like Fallujah and Jamie Stewart’s truly otherworldly voice just paint a picture of not really being awake, but knowing that something is wrong. In fact, it might have been the perfect song for the final moments of my zombie dream as I ran, trying to block the door of the room I was holed up in with the big desk to keep the infected out, but all to no avail – especially when you throw that “Oh well” in there, it seems like it was less terror than just the uncomfortable-ness to the situation that made it scary, just like what you get from Xiu Xiu. (Oh yeah, what was the other dream? My friends and I accidently nuked Baltimore. Go figure. I guess these dreams prove that (a)I’m a nerd and (b) an apocalyptic one at that.)