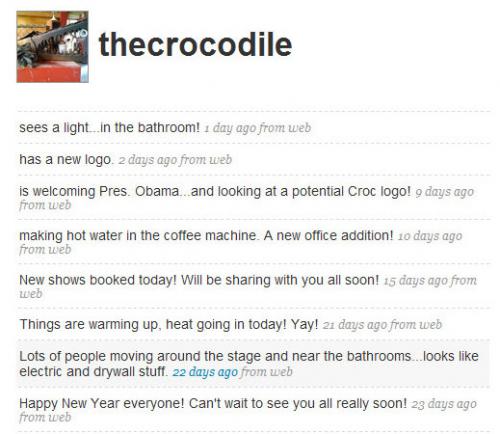 Festival-worthy numbers of performers, artists, bands, clubs, and labels are joining the Twitter party. What started as a way to answer the question of friends, "What you are doing?", Twitter is becoming the "it" thing for music types to develop and retain fans.

Why Twitter? The 140-character limit and mobile-friendly posting means more artists are giving it a go. Texting a "tweet" is radically faster than a blog post, website update, MySpace edit, or email newsletter. A tweet can be sent with any text-enabled phone. Artists are tweeting from the road, during tours, in studio, and really, anytime the urge hits.

Fans have never before had access like this: it's like a backstage pass with benefits. Closeness — or, rather, the illusion of closeness — offered by Twitter can translate into an increase in loyal fans and more successful touring.

Listed below are a few  from the music biz I've noted and keep an eye on. Trust me, there are more.

The Crocodile Cafe
Venue news
very infrequent at the moment, will likely pickup once the club opens
http://twitter.com/thecrocodile

Colin Meloy (The Decemberists)
Personal commentary
1 or 2 a day
http://twitter.com/colinmeloy

Pitchfork Media
claimed but inactive, may not be official
http://twitter.com/pitchforkmedia

Stereogum
claimed but inactive, may not be official
http://twitter.com/stereogum