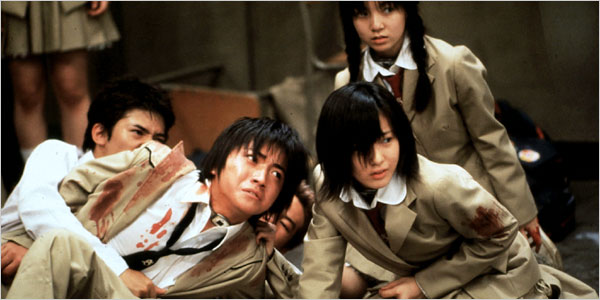 I am a total freak and held out reading The Hunger Games for a long time because I am such a HUGE fan of the 2000 film Battle Royale, and I thought the premise sounded a little too similar…but I admit it! I was wrong. THG trilogy was fantastic and I can't wait for the movie.

That said, I am beyond thrilled that the Northwest Film Forum is screening Battle Royale every Friday at 11pm, starting 3/2 and running through 3/30 – because if you haven't seen it, you NEED TO (regardless of if you're planning to see The Hunger Games or not).

Battle Royale is all about discipline, or rather, how future Japan keeps unruly High School students in check – by selecting one class to participate in the "BR Act", which basically means a fight to the death, with only one winner. The students are released on an island and have 3 days to murder everyone else in sight, and are fitted with electronic collars that will blow their heads off if they refuse to comply.

While BR doesn't have as much glamour and ceremony as THG, opting for a much starker vision of the future with less political maneuvering, it does have TONS of splatteriffic blood and gore (yay!). It also has, you know, a plot. With romance, and stuff. Anyway, my point is: GO SEE IT.