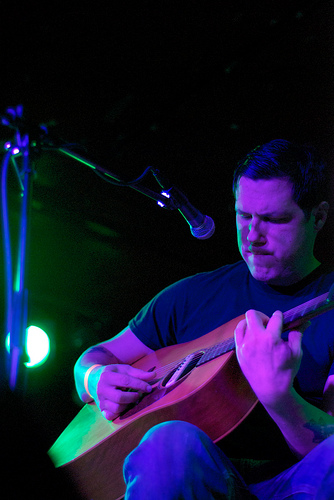 After having the pleasure of attending the Damien Jurado / David Bazan show at Chop Suey last week, and being blown away by the outpouring of support, it's with much reverence and respect that I post this notice for the El Corazon benefit show for John Spalding. The record release is forthcoming, as I'm sure are more events in the future, but this is the last show in a series that happened throughout Seattle recently.

If you haven't been, all of these concerts have been amazing — they're so good that they almost feel like secret shows, with such great artists in such intimate settings. Here's all the details:

Beloved Seattle band MxPx is headlining a benefit show for their late comrade John Spalding, guitarist for bands 90 Pound Wuss and Raft of Dead Monkeys. John passed away last month from lung cancer. Both MxPx and John's bands came out of the exciting Pac NW punk scene of the 90s, and as MxPx went on to many international tours and releasing many records. They stayed in touch with John and now wish to help out his widow Jody. She has been left with a great deal of debt from John's illness and MxPx's Mike, Tom, and Yuri wish to contribute to her relief. It should be an amazing reunion night, as MxPx and 90 Pound Wuss were once signed to the same label and have many friends and family in common.

Keeping it punk, the show will be held at El Corazon, a venue where MxPx and John had played and attended shows over the years. On The Last Day and Amber Pacific will be opening.

Tickets available at Ticketswest outlets & at the door