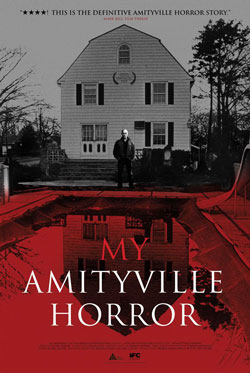 When I was a preteen, I saw the 1979 version of The Amityville Horror, which kicked off an obsession with spirits and demon possession, and learning everything about the family that had lived in the real house and what they had experienced. So I was pretty psyched when I saw that Daniel Lutz, one of the kids who lived through the actual thing, was the subject of this new documentary, My Amityville Horror.

But whoa. WHOA. This guy, who is now in his mid-40s, is clearly messed up about whatever went down in that house. Whether is was actually poltergeists causing the scares, or the active imaginations of the children (via patriarch George Lutz), is left up to you to decide. Regardless, it’s clear that the scars Danny bears from it will never heal completely.

Documentarian Eric Walter does a fantastic job setting up the story for us; covering the history of how George and Kathy Lutz met, relocated to the famous Dutch Colonial in Amityville. And then moving on to how and why they came forward, and the stories that they spun, which resulted in their respective paranormal fame. He also includes interviews with some of the paranormal experts who were originally brought in to investigate the house, along with news anchors and journalists who covered the story.

The problem for Danny is that The Lutz's fame was also projected onto their children, especially after the novel and the movies were released. At one point, Danny relates to a therapist how hard it is for him to have his own identity with people prescribing a movie character’s actions to him—including being called different names depending on what sequel people are referencing.

All that seems like it would be rough enough, but you can also tell from Danny’s awkward social behavior and erratic story-telling that something else went very wrong in that house, especially after witnessing the almost palatable hate he has for his late stepfather, George.

Whatever the truth is, the story of that house in Amityville and the boy who spent time in it is FASCINATING, even though we might ever know what really happened. And after watching this, I hope Daniel Lutz is able to move beyond whatever is holding him to his past and find peace someday.