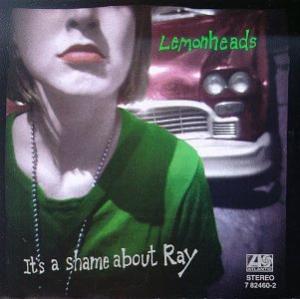 "My Drug Buddy" by the Lemonheads

So, Juliana Hatfield lived with Evan Dando. This was legend in Boston. She claims that she never “did anything” with Evan Dando beyond play music and eat ice cream. Heck, she said that she thought Ben was the cute Lemonhead, not hunky Evan. Whether this is to be believed or not is unimportant. What is important is that the Lemonheads’ It’s a Shame About Ray, possibly the most Juliana-filled Lemonheads album ever, is simply one of the best albums of the 1990’s. Yes, it helps for me to be from Boston to believe this, but listening to songs like “My Drug Buddy” (shortened to merely “Buddy” when Atlantic Records got all nervous-like). Evan and Juliana sound beautiful together, mellow and gentle. Sure, the song is about enabling Evan to do more drugs that anyone this side of Keith Richards, but hey, he really found his stride on It’s a Shame About Ray. (N.B., please, forget about the awful cover of “Mrs. Robinson” tacked onto the album well after its release. The song is not part of the official canon of the album and really makes my skin crawl.) Whatever relationship Evan and Juliana boarded back in late 80s Boston, we may never know, but I, for one, am glad they didn’t miss it.