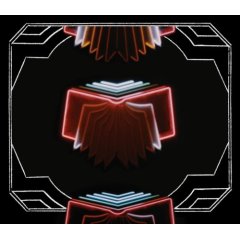 I'm not sure what to make of all this. The Shins I could handle. They had the whole Garden State/Natalie Portman thing going for them that propelled them to #2 on the Billboard Album charts. Not the alternative album chart, not the digital download chart, no, it was the big one: the Top 200 Albums, the same chart that the Beatles, Led Zeppelin, Michael Jackson, Nirvana, Jay-Z, and U2 found fame at the top. Yet, suddenly, we had the deal with the Shins, the indie pop darlings, near the apex of commercial popularity. And just as you've had time to sit down, relax, and think it is all a fluke, you glance at your Yahoo! News and — what this? What's this I read? The Arcade Fire, with a grand total of no hits and no radio airplay to speak of, are the #2 album (Neon Bible) on the Billboard Top 200. Less than 10,000 albums away from both the #1 spot (taken, this week, by Notorious B.I.G.) and from 100,000 albums sold their first week. The Arcade Fire. On Merge. From Canada. The world has got topsy-turvy. Up is down, right is left, yellow is mauve. Indie rock has hit the big-time, and this time none of the usual hype and crap that came along with Garage and Dance-rock and the like. This is not an illusion, and mark my words, you will see, in the next two months, Modest Mouse and Bright Eyes reign as the #1 album in the U.S. and at that point, hang up your overly tight t-shirts and stylish sneakers, it's over. Don't forget to hit the lights on the way out.

OK, maybe that's a little overkill, but is anyone else confused? When did this happen? Some people would like to blame MTV for this surge, but really, when does MTV play music anyway? And is it really the Arcade Fire? Maybe what we're seeing is a popular uprising against all the major label bands that get pushed on us — but sales of those bands (I won't mentioned any) don't see to have changed either. Does it really matter that we understand the source of this unexpected boom in the popularity of bands like the Arcade Fire, the Shins, Modest Mouse, and the like? What this gets down to is an impending fundamental shift in what independent music is, i.e., can you be an indie rocker if you're selling 100,000 albums a week? Many people would say "hell no!" working under the assumption that sales equate to, well, selling out. However, are these bands really recording anything fundamentally different than before? Sure, they might be cleaned up some, maybe more elaborate packaging, but is it truly "sold out" sound? This is where perception and reality become blurred, and the true believers in indie music will stick to the mantra of "popularity breeds decline in art." There is no way I can even come close to solving this age-old conundrum that has probably existed in rock and roll since a bunch of youths in Liverpool complained that their local band was "selling out" too. Just be warned: your world is not what it was yesterday and that band you love that you think no one has heard of may soon be that band that hundreds of thousands of people love.

So, where does that leave us? Beyond all this philosophical yammering, the Arcade Fire have recorded a pretty darn good sophomore album in Neon Bible. It still borrows heavily from its 70's glam/New Wave rock forefathers, especially from the likes of David Bowie, the Talking Heads, and Bauhaus. This clearly evident on the album opener, "Black Mirror," a song that sounds like it hurtled forward in time from Bowie's Hunky Dory-era, with an insistent piano line and half-mumbled vocals over a dark, rolling rhythm section. The Arcade Fire display their musical breadth quickly, jumping straight into the much more upbeat "Keep the Car Running," a track that could be the band's answer to Modest Mouse's "Gravity Rides Everything" — but it could be a little too pop sounding for the Arcade Fire. No need to worry, though, the Arcade Fire haven't sold out. The title track is a sultry, stripped down song where Win Butler's voice takes on a much more confessional tone, especially when backed by Regine's hushed backing vocals. This theme of religion continues into "Intervention" — and it's not subtle with a giant organ sound starting the track. Butler scolds "working for the church while your family dies," which seems like a none-too-hidden indictment of the current politics of both the U.S. and Canada. This is the Arcade Fire in their full-blown theatrical mode and you can tell all the cylinders are sparking; it's a song packed with feeling and drama.

Not everything works as well on Neon Bible. "Black Wave/Bad Vibrations" sounds a little bit too much like art school meandering, taking a page from fellow post-New Wave art-rockers the Lansing-Dreiden. Unlike "Intervention," it ends up sounding overblown and underdeveloped. This is in stark contrast to the much more subdued beauty of "Ocean of Noise," where you suddenly think that the Arcade Fire in channeling the Pixies with that hollow Beach Boys-meet-punk sound. This album diverges from the game plan of their debut Funeral, but that sound can still be found on songs like "The Well and the Lighthouse" and "(Antichrist Television Blues)," which are much more upbeat than most of Neon Bible but really don't separate themselves from the rest. One of the standouts on the album is the Arcade Fire's live favorite, "No Cars Go." Not only does this song capture the musical depth that makes the band so impressive, but it's also infectious as its melody and chorus burrow into your mind. Win and Regine's interwoven vocals are hypnotizing and the whole song almost comes across as some sort of demonic spawn of The Unforgettable Fire-era U2 and Echo & the Bunnymen. Oddly, the album closes with Win attempting to pull off a Nick Cave-like dirge, but his voice just doesn't have the depth to really pull off what he wants on "My Body is a Cage" and it ends up sounding hollow and lifeless.

Even if it seems baffling to the casual observer that the Arcade Fire are as popular as they appear, they by all means deserve the attention. In a world of American Idol bands and mechanically-produced krunk, it's surprisingly vindicating to me to see bands like the Shins and the Arcade Fire become so successful. If this success translates a more appreciative, educated listenership that is fed up with the corporate rock world, that we will just have to wait and see.

Neon Bible shows that the age of the career band is far from over, and the Arcade Fire look like as good of a candidate to keep producing music that doesn't conform to the Clean Channel agenda, whether they are "indie" or not.