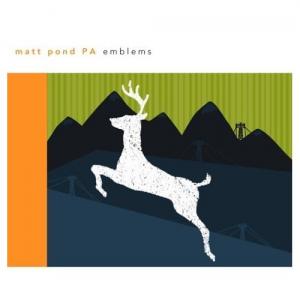 I have to admit, I honestly can't remember if I've ever heard this song before right now. I think I might have, many years ago, but it obviously left me with little to no impression. However, that's not to say that so far, I'm not enjoying the song anew. It has a song of bittersweet loveliness that might not entirely jive with a sunny, warm July morning, but in a way it sort of does. I think there is a literary device or cinematic device that describes this, where the moods contradict each other to emphasize one mood or the other, but for the life of me this morning, I can't remember what it is, mostly because I still haven't had enough time to let my coffee cool down.

Matt Pond PA is clearly working the Death Cab for Cutie vibe here, albeit with a little less of the Ben Gibbard high-voiced sorrows. And therein lies the challenge of the iPod Roulette. I hear this song and that is all that comes to mind – it is really the danger of the mental exercise that many songs are, well, just not interesting.

Matt Pond PA isn't bad, I'm clearly not saying that, but really, the song solicits merely a bit of a twinge of sorrow because that's the whole 'minor key' portion of the song doing its job, but beyond that, there is really nothing else happening. I suppose, though, if I heard the song enough, I would begin to associate it with external events, and that is the key to any song. This postmodern web of discourse between song and life is what builds the construct that TIG exists within, so that we don't hear the songs a lot of the time, we hear the experience. And I have not experienced anything with "New Hampshire," but I'm sure people have somewhere, and that is where the song truly exists.