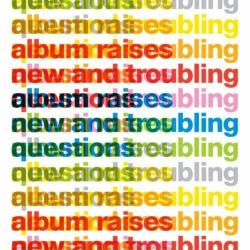 Earlier this year, Seattleites had to make a somewhat heartbreaking decision on which performance to attend – in something akin to a mini music-festival, Neil Gaiman & Amanda Palmer, Das Racist, Unknown Mortal Orchestra, and They Might Be Giants were all playing on the same night at different venues. I was at the Gaiman/Palmer gig, and admit that when Palmer was introducing their special surprise guest, I irrationally hoped it might involve the two Johns (close – Gaiman/Palmer had nabbed Jonathan Coulton, the opener for TMBG that night). Despite so many options, I have little doubt the TMBG gig was packed.

Traditionally, b-sides are some of an artist's most compelling work — comprising mostly of lo-fi, oddball and experimental recordings created out of a need to satisfy a muse over a record label demand or sales quotient. It should follow, then, that the new TMBG b-sides and rarities album, appropriately called Album Raises New and Troubling Questions, shouldn't necessarily make sense, or be pleasing to one's audio palate. This is their third b-sides/rarities compilation, which equates to about one for every decade they have been together — an astonishing and marvellous feat of creativity, endurance, and harmonious relationships. Not taking oneself too seriously apparently leads to longevity, as well as fun!

I have come to expect a few things from TMBG: Brass and polka-tron influences, references to interesting people of historical significance, and to err on the side of the absurd. TMBG have a strange influence on their fans – they appeal to children as much as adults, but one would should not mistake brevity for simplicity. I was delighted to find several TMBG tracks were included on a shyly-collated mixtape from my boyfriend; many years later we would play several of their songs at our wedding. I was sitting in a play a week ago, and the cast included "Ana Ng" in their scant soundtrack, without it sounding out of place. TMBG have a diverse appeal, in all their galloping, oom-pah-pah craziness and joy.

The TMBG rendition of "Tubthumping" features The Onion AV Club Choir, and is difficult to listen to while keeping a straight face. Having said that, it keeps pretty close to the Chumbawumba track — I'd be interested to hear what a fan of the original thinks! I love "Electronic Istanbul (Not Constantinople)" – the vocoder and synths lend it a grittiness and edge that isn't often present in TMBG material — and of course the track remains as catchy as ever. Take it to the dancefloor, I say! The cover of Pixies' "Havalina" is glorious, and I would love to see it performed in a stadium setting. Something about the vocals for this track make this sound vulnerable and anthemic, prompting me to wish for Death Cab to turn this into a cover-song-relay. My last favorite is probably "Mr. Me" — try cranking up the volume and singing along the next time you're "really really really sad".

The highlight of the album is probably the two-minute-ditty "Marty Beller Mask", which poses the creepy, deadpan, and hilarious scenario of TMBG drummer Marty Beller actually being a disguised pop diva. "I can see you through the eyeholes of my Marty Beller mask, 'cos I'm really Whitney Houston on the drums".  It's difficult to join in on the Johns indifferently intoning "Don't walk away from me; I will always love you" when you're laughing.

Strange things can occur when you're in a secret lab with a bunch of mad scientists: some things bubble and rise up, other concoctions overflow or explode, but without such experimentation you're much less likely to stumble onto the winning formula. May the expedition towards good humor and free-flowing creativity continue.