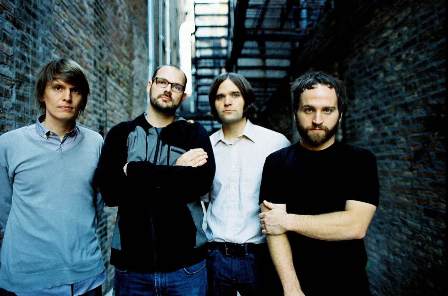 I can't think of a better start to my Wednesday than an email asking me if I want to post about Death Cab for Cutie.

I can, actually. When said email contains news about DCfC's involvement with the commemorative Obama inauguration CD-DVD, and tour dates, and a gorgeous Walter Robot video for "Grapevine Fires" that I got to watch over my first cup of coffee this morning — that certainly kicks things up a notch. Heightened only by the fact that all of this has transpired on a regular old weekday, in the city I now call home: Seattle. Good morning, indeed.

Let's have a read, shall we? [With peanut gallery.]

[Really? Did you hear that? Spring Tour. Gush.]

After watching the short film / animated clip, I was even more enamored by the poignant accuracy of that last sentence. See for yourself:

And that's not all…

Fresh off the plane from headlining tours in Australia and Japan, Death Cab is turning around and heading right back out for a US tour. Opening support from Cold War Kids, Ra Ra Riot, and Matt Costa (and stops in Bellingham and Spokane):

(See the DCfC tour page for specfics, as all of the opening acts aren't all on every night's bill.)

I took a peek at the Bellingham show, and it's actually two nights, already sold out. In a sit-down, gorgeous looking Paramount-esque kind of place. Not knowing too much about these other venues, I'm going to go out on a limb here and say that there's definitely a propensity this leg of the tour for more intimate campus-housed settings. Always a treat for fans of a national act.

Sans pyrotechnics, as we all witnessed at Bumbershoot last year.

Don't miss Cold War Kids next month at the Showbox, unless you're heading out to Bellingham, on April 22nd. And check out Ra Ra Riot's most recent set at Neumo's with the lovely Telekinesis!, as reported by KEXP.