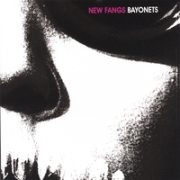 The interplay of Bessenhoffer and Morrison's one-two punch, always-seem-just-about-to-fall-apart-and-then-up-and-bite-you-on-the-ass guitar lines over Gailitis and drummer Ken Viste's rock-solid, sinuously muscular rhythm backdrops goes a long way to capturing the spark of classics like The Fall and Drive Like Jehu, as well as local heroes Popular Shapes or Charming Snakes. Bessenhoffer's tommy gun stacatto exclamations almost add their own layer of percussion to the songs and the lyrics have a good mix of toss off one-liner-ness and sub rosa menace ("Set fire to the amplifier / Stab your synthesizer in the neck") that settle into your brain more than once while listening to the album.

The standout tracks on Bayonets, however, occur when Bessenhoffer's snarling shouts, which on their own can get slightly similar sounding, mix in with more hook-laden gang melodies and borderline girl-group backups on "Kiss Me Kodiak," "Paper Skulls" and "Better Yet," and on the album's great closing title track, in which the duel vocal interplay ends up sounding like an awesome argument between Funhouse-era Iggy Pop and Ian Curtis. Bayonets is pretty sharp.