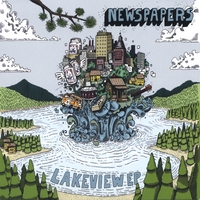 the sleepwalker February 8, 2008 no Comments

Portland's Newspapers have almost everything necessary to be a really great band: a great sense of song arrangement, excellent vocals, lovely harmonies, and just enough vintage gear. The only thing that's missing: songs.

Lakeview EP is an enjoyable — but very scattered — catchy, lo-fi effort containing six musical exercises that are inarguably sonically pleasant. If, however, you require your cutesy indie pop to have hooks, clever lyrical turns, and dynamics, you'd best move on, there's not much to see here.

As much as I'd prefer not to penalize for technical issues when scoping bands that burst with DIY-spirit, Lakeview EP sounds decent and passable, but not great. The guitars are often distractingly loud and the vocals often distractingly buried and possibly overtuned.

The first song, "Lakeview," heavily borrows from Iron and Wine, but throws in the arrangements of Boy Least Likely To. By the time we've mellowed out, there's a breakneck jump into the surfy rocker "Devil's Dance Blues," which is not a bad tune, but they don't quite have what it takes to pull it off. The guitar riff gets a top grade here, but it doesn't sit in the same class as the rest of the track arrangement and content. It comes off more like the Foo Fighters than the Pixies.

"Lies & Lies" is an innocent but forgettable tune. It starts off with some wobbly tempoed guitar that grows into nice, but overused, vocal harmonies. The song, unfortunately, just never goes anywhere. It lacks a solid chorus, wanders into a guitar solo when it's time to end and then unnecessarily "rocks out" afterward in a minute-long outro.

At the halfway mark, we're hit with "Forest City," the best track on Lakeview EP. It's a new-wave dance-pop song with a bop that's fun, but a little too sloppily performed to really groove on. It's kind of a reduced version of The Monroes "What Do All The People Know?" The vocals are quite successful during the falsetto parts and wander into shrieky bits that end before they get tiring.

"Elaine" admits the bands strengths by favoring "ooh-ooh-oohs," repeated verses, and synth hooks over attempts at substance. Finally, if you can make it through the 3 minutes of instrumental in "Minimum Wage," you get something that resembles a Blake-sung Rilo Kiley song, but lacks the charm and wit.

Overall, Lakeview EP makes for a pleasant experience, but after you take it for a 22-minute spin, you'd better hope that there isn't a quiz. You won't remember anything about it.