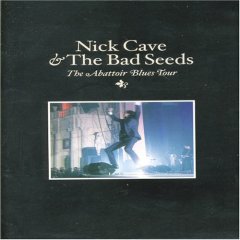 I adore Nick Cave and the work of his comrades the Bad Seeds, with their gloomy insouciance matched by a passion for life and expression that helps them to rise above the one-dimensional doom of fellow veteran punks and Goths. Problem is, I got a little bored with their steady output a few releases back — maybe just because I have been listening to the damn band since Cave gave up the Birthday Party and caught my eye by recording Leonard Cohen's "Avalanche" on their first record.

But now that Mute has released this invaluable visual and auditory documentation of the Abattoir Blues tour in 2004, my interest has been rejuvenated. The release features two DVDs and two CDs of various splendidly ominous and beautiful live performances supporting Caves' most recent album release, and the affordable box set also throws in a half dozen or so recent sexy videos wherein Cave's lyrical imagery is joined by gyrating ripped black girls and drag queens in shiny boots and animated foxes and rabbits. A great, if dark, erotic sense of humor throbs throughout, and this all would be worth it for the extended live video encore of "Stagger Lee" alone. The selections lean occasionally towards the obscure and sentimental ("The Ship Song," "Breathless") but don't leave out cool KEXP staples such as "Red Right Hand."

Cave was the son of a commanding professor of English, and his own musical obsessions have made him a formidable literary and visual performance presence.