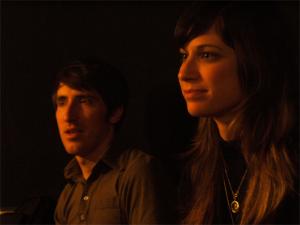 Betsy Boston Hangs with Nicole Atkins and the Sea

Spend any amount of time talking music with yours truly these days, and you’re bound to hear about two particular acts way more than any others: Boston’s Township (who we’ll talk more about another day), and New York/New Jersey’s Nicole Atkins and the Sea. During April, Atkins & co. are playing a rotation of weekly residencies in Boston, Philly and D.C. on Monday through Wednesday nights, respectively, so get your east coast ass out to see her before her full-length Columbia debut, Neptune City, is released in July.

On the first night of the Boston residency, Atkins and her D-men (Dan, Dan, Derek, and Dave) took to the stage after a lovely and mellow set by Boston/San Francisco alt-country outfit the Vinyl Skyway (who play San Francisco’s Rock-It Room next Wednesday the 18th). While setting up and sound-checking, Atkins requested that the sound guy make her sound “more like Elvis” — resulting in an increase in echo-y grandeur on her mic and giving her vocals the dreamy, ethereal quality that is a signature of her live set. This spooky (and by that I mean ghostly and airy, not frightening) quality seems a natural sonic destination for Atkins, who grew up on a river in Neptune, New Jersey and used to imagine that ghosts were lurking in the fog. In a conversation over red wine backstage, she fondly recalls her childhood and the eeriness she always sensed in her neighborhood. “My friends that lived down the street from me would always say there’s ghosts in the river, so when we wanted to hang out in high school, we would meet each other halfway, and my friends would be casually walking and I’d be running at full speed like, ‘Aaaaghh!’, like running away from nothing.” These spirits seem to have filled Atkins’ soul to inspire the beautifully eerie songs she crafts.

The Monday night set at the Paradise began with “Neptune City,” the final song on the Bleeding Diamonds EP. Drummer Dan Mintzer used mallets instead of drumsticks on the soft, breezy song, while Atkins established herself as the mesmerizing figure in the room, which was criminally empty. That didn’t stop her from delivering as though she was in front of a sold-out crowd — which likely she will be in a few months. “If nobody knows who you are, you’ve gotta go and you’ve gotta play in front of seven people and you gotta hope that next week they’re gonna bring their friends,” she says. “We drove up here to play and we’re gonna play.”

Though her label has allowed her to take things slow instead of over-hyping her (“We’re trying to do it naturally, just cause the music I make isn’t polished pop,” she explains), they’ve begun working on press and promotions in preparation for the full-length’s release, including an article in an upcoming issue of Interview magazine. Atkins, who remains grounded and humble despite her lofty talent and record contract, speaks excitedly about the photo shoot she did for the piece: “They were like, ‘You’re so great to work with! You wanna try on all the stuff!’ I’m like, Who doesn’t?! My clothes are from Target, man.” In fact, on this Monday night, Atkins wore the same dress she was photographed in for a Rolling Stone shoot last year, when she was called one of the Top 10 Artists to Watch by the magazine.

The band followed “Neptune City” with “Carouselle,” an upbeat song also featured on the EP on which keyboardist Dan “Cashmere” Chen plays tandem keys and glockenspiel for an apropos carnival-like effect. Guitarist Dave Hollinghurst played an aesthetically gorgeous and classy-looking red guitar that sounded just as it looked like it should. He was well-dressed in black and the guitar was almost as much a particularly good fashion choice as it was an instrument. As a matter of fact, the entire band is easy on the eyes as well as the ears.

Next came “Maybe Tonight,” an up-tempo number in which Atkins bellowed the title words, momentarily recalling Blondie’s “Atomic.” To watch Atkins sing is spellbinding; she has a voice that’s at once raspy and angelic, and she wraps it around notes so effortlessly that everybody takes notice. “My voice has become a separate thing from myself because I have a polyp,” she explains. “That’s why I sound all raspy all the time. It’s just something I’ve always had, but as I’m getting older, I have to take care of it now, to maintain it.”

The showstopper of Nicole Atkins and the Sea’s current repertoire came fourth in Monday night’s set. “The Way It Is,” which is not on the EP but can be streamed via MySpace, is a divinely intense and wrenching song. “I love singing [‘The Way It Is’] — it’s so dramatic,” she says with wide eyes. As she sings, Atkins grips the microphone with both hands (when not playing her also-classy black guitar) and holds it as if she’ll die if she lets go. “The Way It Is” is poised and ready to be the song that makes Atkins famous, and allows her to move out of her parents’ house and stop taking occasional temp jobs. A video shoot for the song is planned in between residency appearances in the coming weeks. “This is the first month we’re really busy,” she says. “[The video is] gonna be so fucking cool. It’s gonna be all David Lynched-out.”

Oh yes, David Lynch. Read anything about Atkins and his name is sure to be mentioned, as well as frequent Lynch composer Angelo Badalamenti. Atkins has been heavily influenced by the works of the pair, from Twin Peaks to Blue Velvet and Mulholland Drive. Her dramatic songs are comparable to those sung by Julee Cruise in the Twin Peaks roadhouse — if Atkins stood atop a stage adorned with a red velvet curtain, you’d expect a giant to appear any minute.

“I sent an email to Angelo Badalamenti with ‘The Way It Is,’ just saying ‘What do you think?’” says Atkins. “And he wrote back saying, ‘I think our Sicilian great-great-great-grandparents must have laid down on a picnic blanket in the park and done something together, if you know what I mean.’” The notion that Atkins, herself of Sicilian heritage, may be cut from the same musical genome cloth as Badalamenti, though just a joke from an admiring idol, truly is believable.

The Monday set powered on with a series of three songs — “Cool Enough,” “Party’s Over,” and “Love Surreal” — each distinguished and glorious in its own way. The D-men who comprise The Sea have a way about them onstage that suggests they’re as entranced and possessed by the music they’re playing as anyone listening. Backstage, they sit in on the interview and all seem totally smitten with their current jobs as members of Nicole Atkins’ band.

“Everything is the same,” says Atkins, speaking of modern music. “That’s why nobody wants to take us out on tour with them, cause we’re not the same.”

Atkins continues: “It’s funny, because a lot of people in the underground scene are always like, ‘you’re not indie enough’ or ‘it’s too accessible.’ And then the accessible people are like, ‘it’s too indie.’ I feel like with this whole renaissance of girls doing ’60s and ’50s-style music, they do it in such a literal way that it just doesn’t seem genuine. It seems like this is a style for my record, not like this is my life. We’re not trying to do anything retro. This is the music we listen to. It has a backbeat and some fuzz on the guitar because those things sound good and I don’t know why they ever left music.”

Layes is the latest addition to the ensemble, which has seen a rotating door of bass players. The other members have been along for much of the ride. Dan “Cashmere” Chen, who one may imagine gets his nickname from the silky smooth way he strokes the piano keys, met Atkins through mutual friends in New York. “I heard she was putting a band together and I was like, yeah, so’s everybody,” he recalls. “And then I saw her sing at Sidewalk one night, and I was like ‘I’ll be in your band!’”

Atkins confirms: “He MySpace’d me and was like, ‘Do you want a band?’ And I was like ‘Yes please!’ And he came with the drummer — they were a package set.”

“Dave [the guitarist] is actually my friend from the Sidewalk Café,” she continues. “When I used to play the anti-folk open mics, he and I would always talk. And we had guitar player auditions and all these awful Sam Ash dudes were coming in with their Audioslave pedals and we’re like, shit, this stinks. And then Dave just walks in, and I’m like ‘I know you!’ And that was it.”

They all collaborate on songwriting. Atkins uses her cell phone to record melodies that come into her head. She’ll bring her idea to the band, often using her voice to explain what each part should sound like. “They’ll translate my weird squawkings. I’ll basically just sing it to them. I don’t really know the names of chords and I’ll just write the song and be like ‘alright it’s ding-a-ding-a-ding-a-ding’ and they’ll be like, ‘ah, E7.’”

Atkins studied illustration at UNC Charlotte, though she doesn’t have much time for it anymore. In a sense, though, she is still an illustrator — using words as her medium. The lyrics to a Nicole Atkins song are full of vivid imagery. On Monday night’s final song, “War Torn,” she tears your heart while singing about her own. The performance of this song would not leave anyone unaffected; she and The Sea owned every goosebump in the room in these final measures.

“I hope people like the record,” says Atkins. “I love the record. I hope it gets a shot to be heard.”

When asked if there has been a moment yet when she felt like she had “made it,” she quickly says no. “Hopefully I never feel like that, ever. Because the moment I feel like that, that’s when I come out with a hot sauce.”