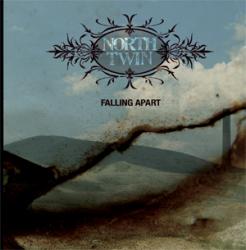 Falling Apart finds itself walking a pencil-thin line. It isn’t poppy enough to whet the thirst of mainstream country fans, and it's tainted with enough dog-in-the-pickup-truck, girlfriend’s leaving, cut-off flannel shirt honky-tonk twang to scare off the most alt-country fans. North Twin have made a decent record, but who’s going to listen to it besides loyalists to KEXP’s Swingin’ Doors, Little Red Hen regulars, and Kent residents who find themselves in a record store not located in a Wal-Mart super center? It’s sort of a "if a tree falls in the woods" situation.

I mean no offense to Seattle’s country music purists, but I see it being difficult for Falling Apart to find a home among Seattle’s somewhat homogenous alt-country scene, let alone in the city’s greater and more fickle music community.

North Twin is at their best when guitarist Tim DiJulio cranks chokes out a Nashville saturated rhythm that haphazardly paints a good ol’ boy moustache on your face. However, the quick pace of these songs allows vocalist/guitarist Tony Fulgham to indulge in lyrics that reek of whiskey-breathed country clichés, such as on the tracks "The Good Guys" and "Motorbike." He proves to be a much better balladeer, allowing himself to unpack his emotions more slowly, on songs like "Turn Around." On "Halloween in Houston," Falling Apart’s strongest track, Fulgham’s lyrical abilities shine and are delivered with a ghostly beauty – one that transcends genre.

The listenability of North Twin for the layman varies greatly from track to track. "Broken Legs" is a gentle acoustic track with a broad appeal, while "Falling Apart" nods to the band's appreciation Merle Haggard and George Jones records.

If Wilco is as country as you can go, I can’t recommend this album to you. Country, like Budweiser, is definitely an in-born taste. However, those like myself, who grew up with yearly square-dances at the town livestock fair, will be able to truly appreciate the musicianship on Falling Apart, without getting bogged down in or turned off by the somewhat abrasive sound of a Texas bar room.