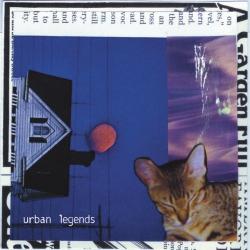 I’m all for filling in the back catalog when you're fond of a band. Sometimes it can be very worthwhile and sometimes, well, it just really does feel like filling in. For all of us Thermals fans, there are plenty of works by Mr. Hutch Harris to take pleasure in from those times before the Thermals, and the release of Of Old Lost Days from Hutch’s Urban Legends moniker is just one of those ventures.

Although it does add to the Hutch oeuvre, it does come across something in its formative stages, never really gelling into anything more than a collection of early works for the completist in all of us. Urban Legends never hits as hard as the Thermals, instead opting for more of a lo-fi sound akin to bands like Apples In Stereo, Tullycraft, and Bunnygrunt. The vocals are almost always lost in a haze and the guitars sound distant – not being a musician, I’ve always wondered if this sound is a product of studio recording conditions or choice of the band? I suppose it is the sound of the first Velvet Underground album (the Velvet Underground being that band from which every modern rock band in the universe is descended), but it has always baffled me. Anyway, back to the point: a lot of songs here are rough around the edges (which is not too surprising in this resurrection of material, especially the second half of the album), and not in the same anarchist way of the first couple Thermals albums. Instead, it feels like those first few steps into musician-land.

One of the most solid and satisfying songs on the album is “Soak and Drown,” a pure pop gem with cute little vocal harmonies and a jangly guitar riff that is full of teddy bears drunk on sunshine. You’d wish that the album kept on this track, but you have to sift through a number of unremarkable songs before Hutch gets us back on track with “The World is Strange,” another toe-tapper for those of us looking for happier times. There are some rather intimate sounding moments from Hutch, especially on “Electric Heat,” which sounds as if it was recorded at someone’s house concert with the crowd snapping the beat while Hutch strums his guitar in an oddly Green Day-like sound. You could argue that he takes an almost Tullycraft-like turn on “Party as Long as You Can,” and “Every Face” – you almost wonder how Hutch got into a mood to let loose like he did with the Thermals. It gets disturbingly cheery on “We Partied Here Enough” where things get pop-rock perfect and, in a sense, you can hear the seeds of the Thermals deep-down, we just need Hutch to put down the harmonica and plug in his guitar like a Portland-based Dylan.

Of Old Lost Days is a perfect title for this collection – if you sit up late at night wondering what Hutch was doing before the Thermals, then you know your ship has come in. Otherwise, although it has it moments where you can hear why the Thermals have become one of the darlings of the independent music press, it really isn’t something the casual Thermals fan needs to run out a buy, even if you long to feel complete.