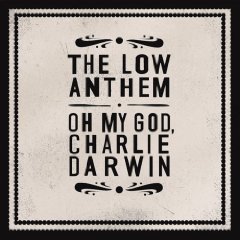 You could be forgiven if for a few seconds, maybe longer, you thought that The Low Anthem’s Oh My God, Charlie Darwin was an undiscovered Scud Mountain Boys album, circa Pine Box, with a crisp acoustic guitar and Joe Pernice singing in a higher range. Or maybe you’d guess it was Bon Iver in a slightly different garb, as the brittle lead voice on “Charlie Darwin” ethereally floats over that almost lo-fi guitar and long-vowel harmonies. Like Bon Iver, the Providence, Rhode Island-spawned trio picked and packed their gear for a seemingly backwoods recording session (notated in the liners thus “Recorded in the solace of a Block Island winter”), where random, found sounds peek around the corners (hear that fountain and the bird-chirps as “(Don’t) Tremble” awakens lazily). The trio – Ben Knox Miller, Jeff Prystowsky, and Jocie Adams – adore subtlety: The acoustic guitar picking of “Ohio,” with soft-focus vocal, gains its depth from the slow-rising crest of a minimal clarinet and a harmonica’s spectral glow amidst the harmonies. They shape-shift, too, from gauzy vocals and instrument palettes to indulge a raucous side, growling out “The Horizon is a Beltway,” which chugs along in a simple guitar-specked rhythmic stomp, belting out a reading of “Home I’ll Never Be,” Tom Waits’s Kerouac adaptation, and then their boozy guitar rave-up, “Champion Angel,” with its pile-up of tattered harmonica and sandpapery guitar. They love their Americana tropes, delving often into displacement and road-worn living (“Ohio,” “Ticket Taker,” “Cage the Songbird”). They’re kindred souls with Fleet Foxes, Will Oldham, Phosphorescent, and Centro-matic – not bad company, by any stretch.