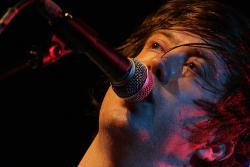 Noise for the Needy sponsored 13 music showcases in just five nights, all of which benefited Rise 'N Shine, a local non-profit that helps kids and teens living with HIV and AIDS. While all the shows were stellar, the apex of the weekend (at least for us imaginaries) was the closing show, featuring Ghost Stories, Sera Cahoone, and our favorite earnest boys out of Austin, Okkervil River, who played an amazing set equally divided between songs from their forthcoming record and their previous releases.

The crowd wasn't phased by the fact that it was Sunday night and the end of a festival. Will was dressed in a suit and looked very dapper. We knew we were in for a fine evening of entertainment.

As someone who saw Okkervil River play in front of only 20 people not so many years ago, I was surprised and thrilled to see the number of superfans at the show. A horde of folks in the front sang along with every word (except for the new songs, of course), big muscley guys were WOOTING up a storm and yelling requests, and I swear I saw one woman in the front row wiping tears.

I loved hearing "Kansas City" and "Black Sheep Boy" live, as they're two of my favorites, and the new songs were great too; they seem more rocking/less introspective than the last records. I especially loved the song called "You Can't Hold the Hand of a Rock 'n Roll Man." That just confirms that the new record is going to rock!

I have no doubt that new record is going to be exquisite, as the show was. Closing the set with the final encore of "Westfall" was mindboggling. Murder ballards are one of my favorite song types, and hard as it is to believe that a fine group of fellas could possibly hurt anyone, they were utterly convincing — even chilling — especially by the end of the song. "Evil don't look like anything," indeed!

My only complaint about the set was that they didn't play the Big Star cover of "O Dana" (which they perform live on their Austrailan-import EP Overboard and Down), as I was hoping Will would sense my prescence and play it. Luckily the disc was in my car so I played it two times on the drive home.

When it came time to end the set, they did so with "Okkervil River Song" which features KILLER accordian accompaniment…

that Jonathan Meiburg can really wield that thing. Actually, I'm surprised they didn't drag out the accordian earlier. I mean they lugged it all the way here from Austin and if memory serves, used it on only one song. That's a hefty "extra baggage" fee when they flew up special just for this show. But then, it was for their theme song and I guess you can't cheap out on that.

Maybe they had a polka gig at the Leif Erikson center scheduled for later in the week that slipped under our radar?

We can only hope!!