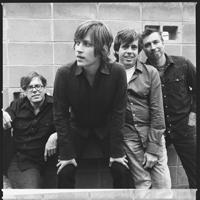 A rollicking good time with the Old 97's

The Old 97's slayed the Showbox — I mean absolutely rocked the place. I have seen them heaps of times over the last decade, and I'd put this show right at the top of the list of performances (Well, next to the first-ever time I saw 'em at the Showbox and fell instantly smitten).

Going in, I wasn't sure if the gig was sold out…after all, they do have a new album out, but I wasn't sure how many fans would come to support it given the interlude of two Rhett Miller solo albums between the last couple 97's endeavors. But it was packed (and yes, officially sold out).

Each of the four-piece members had clear moments to shine, from guitarist Ken Bethea's impossible number of wailing, spotlighted guitar solos, to second vocalist and bassist Murry Hammond's country-twanged lead songs, to drummer Philip Peeples' bounding jams (though not as bountiful as I'd have liked — he probably got the bulk of the shaft on the night. Maybe he doesn't like the attention as much as the rest?). And of course Rhett, with his swingy hair and swoony looks, always steals the stage.

The band caroused through nearly two hours (!) of tunes, from early favorites like "Victoria" to a lot of newer material off Blame It On Gravity. The night was mostly about rollicking rockers, with a sparse few downtempo numbers in the lot. The crowd went especially nuts for some of the tracks I, too, consider favorites — like "Melt Show" (this is the song that initially turned me on to this band), "Time Bomb" (my annual birthday request), and second-encore "Designs on You." There was no "Murder (Or a Heart Attack)" though, nor "Nineteen." Alas, a girl can't have it all. But when Rhett sang the line "baby I'm not lonely, I've got my imaginary friends" from "Lonely Holiday," a big grin crept across my face (he had to have been talking about all of us imaginaries, right?)

An hour-plus in, the band left the stage and Miller came out to whip through two tracks off his solo records ("Come Around" and "My Valentine") — and whipped I do mean. He blew right through them at such a fast tempo, I wasn't sure he had time to catch his breath between verses. I did wonder what his bandmates were thinking as Miller had the spotlight all to himself…Yet one of the most special moments of the night came next, when Murry joined the stage to sing the softer "Valentine," which always makes me get a little verklempt. Rhett stayed on stage, helping harmonize while tossing back some beer (presumably) from a red keg cup. The two commented how this casual duet was reminiscent of the Ranchero Brothers days in '94 when the two needed food money.

They've come quite a way since then. After all these years, albums, and countless tours, the Old 97's still carry off an air of fresh-to-the-road exuberance. You could see them having pure fun on Saturday night, evidenced by the sweat dripping off their brows and the huge grins on their faces–and ours.