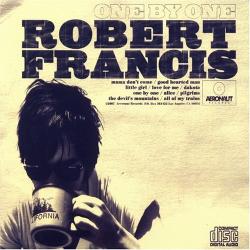 For someone raised in Los Angeles, Robert Francis' music suggests a life growing up traveling between the stark contrast of neon and desert, skirting big cities and taking dusty backroads interacting with people who only listen to AM radio, drive cars and trucks older than his 19 years, and getting to know people over a cup of coffee in a diner. Robert has already worked with some greats in music (Ry Cooder, John Frusciante), trained musically, and now you get a sense he's gone looking for the life experience to write about. This is indie folk music: Wilco without the electric guitars, or Ryan Adams' Heartbreaker without the affected tone.

The album sets the tone with opening track "Mama Don't Come," low and sleepy with a gentle piano and strains of a steel guitar. The song that stands out to me is the title track "One by One," which fleshes out the female background vocals of Francis' sister Juliette Commagre into a duet. The lyric, "We end up passing one by one" suggests a double meaning of passing by an open funeral casket, reflecting on a life no longer, and of passing each other on a street, often in our own worlds and wondering how often we think of others. On "Little Girl" it feels almost as if I'm listening to Francis' message on a voicemail message, it seems that intimate and unaffected and again old beyond his years, "What kind of man have I become/who have to let this go/fate has made a fool of me/and I'll reap now what I sow."

Robert Francis' One by One takes you away from the big city bustle and rush into lush flowing open spaces. It will take you inside the soul where we hang on to those memories of easier times, of loss, of heartbreak. Less than feeling painful and heartwrenching, the music feels mellow and real.