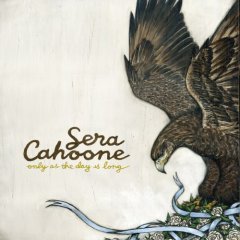 Only As the Day Is Long

Sera Cahoone’s sophomore release Only As the Day is Long is ten tracks of roots-folk with indie pop appeal. Steel guitar and harmonica add warmth and grit to songs about shitty hotel rooms, lightning, and relationships. The release showcases the songwriting and performance chops of this former drummer from Carissa’s Wierd, the group which also birthed Band of Horses.

Make no mistake though: Only As the Day is Long is not your momma’s country music. Sera Cahoone’s work takes the Buck Owens sound, stirs in a dash of R&B, and produces a country-noir sound appealing to indie listeners who typically cringe at “country.”

A particular standout from the release is “The Colder The Air,” with an intriguing arrangement of crisp guitar riffs, firm drum work, and steely vocals. This powerful song has a subtle ebb-and-flow rhythm which perfectly echoes the emotional turmoil of making a difficult decision. The release hits its stride with the title track "Only As the Day is Long." This slow burner builds to a tense chorus: “Lightning strikes only in waves. I know I’m safe for now, but the rest is on its way.” It is a memorable hook with the potential to get stuck in your head.

My favorite track, however, is “Running Your Way,” which is the most optimistic and upbeat song in the collection. “You’ve got so much left in you for the big old world to see.” Something about the song reminds me of Carter Tanton's group, Tulsa. It would be an interesting experiment to put Sera Cahoone and Carter Tanton together in a room and see what comes of it.

My one wish for Only As The Day Is Long is for more variety in tempo across the body of work. The songs stay within a narrow range of pace, which can get a little repetitive all in one sitting. In 2006 I was fortunate enough to see Sera Cahoone and her band perform a cover of Buck Owens’ "Love’s Gonna Live Here." They had a great time paying tribute to that influential songwriter and performer who had recently passed away. Sera Cahoone and band are clearly capable of performing upbeat and playful music, and it would be great to capture some of that in a recording.

Only As the Day is Long is great for highway driving, airplane travel, Sunday morning paper reading, and late night wind-down time. The songs would also sit nicely alongside Neko Case and Corrine Bailey Rae in an all-girl playlist to accompany your house or yard work.

Give this one a try, even if you run away fast from “country” (as I do.) This is country-noir. Or indie roots. Or neo-folk. Or some other label altogether. Actually, just forget labels. Only As The Day Is Long is a compelling addition to your music library — even if you're not sure where to file it.