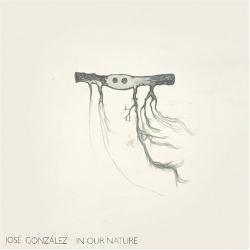 If ever there was an heir apparent to the emotionally bare music of the likes of Nick Drake, Elliot Smith or Jeff Buckley, José González is it. Hopefully he won’t follow the path that those others did, but In Our Nature, González’s follow-up to the dark gem Veneer, is so choked with emotion that you wonder how he was able to get the thing on tape. The style hasn't changed much – still mostly José and his guitar – but really, when you have the passion that he has to playing his music, the accompaniment really doesn’t matter.

If anything, In Our Nature builds on the solid foundation of Veneer, and González allows himself to be a little less sparse than he was on the first album – just a little though. It is not readily apparent when you pop in the album, instead you are greeted with José sounding like he’s recording on his 4-track, dubbing guitar lines over vocals and calling it a day. Not to say that it doesn’t sound great, it really does, but “Down the Line” is a stripped down beauty – who needs a band when you can generate this much sound from so little instrumentation? That is really all you have to say about the arrangements on In Our Nature. Just listening to “How Low” you can almost feel José right there next to you, it is the immediacy of his songs that make them so remarkable compared to so much singer-songwriter types.

You can more or less divide José González’s songs into two types: a plaintive ballad and the gentle ballad. Songs like “Teardrop” are the former, where you feel José’s heart bleeding through your speakers as the emotional rollercoaster builds up steam. “Killing for Love” is a little less melancholy, but it still is wracked with a sadness that makes the song both impossible to listen and not to listen. For those of you searching for the next “Heartbeats,” you can try “Time to Send Someone Away,” which for its heartrending title, it is surprisingly upbeat and catchy, it is the real ear-catcher of the album. “The Nest” might be the most fully-developed song on the album (and an example of the "gentle ballad" type), extending González’s reach beyond guitars with an odd synthesizer solo in the middle, but it just blends in fine.

One of the most unanticipated turns on In Our Nature is the 8 minute long “Cycling Trivialities”. On paper, it would not seem natural combination for José González to record an “epic,” but his lyrical songwriting style lends itself well to this drifting number. It is a testament to the prowess of González’s songwriting that he can get away with such indulgences without imploding, considering his average song length is closer to two and half minutes.

It is hard to tell whether In Our Nature is an expansion of González’s sound as much as a refining of his craft. Likely, if you didn’t care for Veneer, you’re not going to be turned In Our Nature. However, for the multitudes of people who have never heard José González, this album is a perfect introduction to Swede’s song craft. In Our Nature is a starkly beautiful album, leaving much of the work to the listener, but it’s a task that pays off in spades.