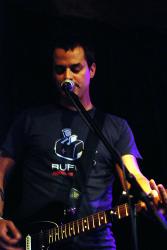 The Pale Pacific at the Crocodile

Here’s a necessary confession: I’ve been a pretty big fan of the Pale Pacific for as long as I have been going to shows (which has been about 5 or 6 years). Another (probably unnecessary) confession: I don’t think I’ve ever made a mix CD for a girl I was interested in without including a song from the band’s third album Gravity Gets Things Done. I can’t say that it’s ever really helped — but that’s my problem, not theirs.

Over the years I’ve seen the Pale Pacific (or just the Pale, as they were known as a few years ago) probably half a dozen times over the years and I’ve listened to Gravity hundreds of times. To me, it's the record Fountains of Wayne would make if they set out to document the “high school experience” for typical students from my generation.

Of course I was very interested in seeing the band play early last Saturday evening. As they are wont to doing on occasion, the Crocodile hosted two shows: an early, all-ages show and a later 21+ show. I found myself at the former.

The band hasn’t played too many live shows as of late and I don’t know of any plans for another studio album. It took about five minute into the set for me to realize just how much I've missed seeing this band live. The band has a decidedly powerpop sound, with delicate harmonies and an upbeat, guitar and keyboard-based sound. The second song of the set was “Wake Up Call,” one of my favorite songs off of GGTD. The band picked up the tempo and made it more of a rock song. Of course the lyrics and harmonies remained and left the first memorable moment of the evening. Just before that, lead singer Gabe Archer started to tell the crowd that he was nervous only to be interrupted by an impromptu massage from guitarist Cameron Nicklaus. “Suddenly, I’m not nervous anymore,” he said.

The transitions between songs were a little awkward and the between-songs banter did belie a few jitters but none of that really mattered as the band still hit all of the important notes and really sounded well throughout the 75-minute set.

The set list included many songs from both Gravity Gets Things Done and its latest (2005) LP Urgency, as well as a cover of the Police’s “Walking on the Moon." Fans were encouraged to vote for the songs they were to play via the band's MySpace page and Archer assured everyone that they took the votes seriously and tailored the set to reflect those votes. His parents were in attendance and his mother playfully pointed out that the song she wanted to hear wasn’t being played. The response was, “Mom, your song got one vote.” I’m not sure which song it was, although it could have been “Your Parent’s House”* (off of Urgency).

For many people, myself included, the high point of the show was toward the end of the set when the band played the song “Gravity Gets Things Done.” The crowd (taking up roughly 2/3 to 3/4s of the Croc’s floor) sang a few lines of the chorus. The song is one of the great “I like you” songs in the past few years. Hearing it in a room full of people who love it as much as I do, singing along to every word, made me wish that I never have to hear that fucking “Hey There Delilah” song ever again.

I’m not sure when the last Seattle Pale Pacific show was (prior to Saturday evening) or when the next one will be, so this show was an especially nice surprise to a warm summer weekend. There was some talk of recording this show for a live album, which I really do hope materializes – if only for my own selfish reasons. I hope the band continues to put out great indie pop/rock and create more lasting memories. And if not, I’ll still cherish the ones I already have.

* Yes, I know “Your Parent’s House” did get more than one vote.