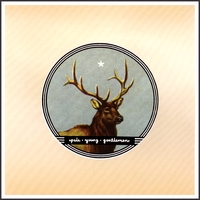 I think I love you.

First, you brought me Sleeping in the Aviary, whose album gave me that excited feeling deep inside and who came to my town and rocked my socks off one night last month. Their high-energy show and kickass songs made a lasting impression on me, and their record easily makes my list of 2007 favorites thus far. Good one, Madison.

Then a couple of weeks ago, the imaginary CD fairy delivered an album so good, so truly impressive, that I have not been able to turn it off or get it out of my head. Madison, what do you put in your water to yield such terrific indie rock? And may I have some? Pale Young Gentlemen begin their mini fiesta of orchestration with "Fraulein," which starts with an ominous cello line over guitar plucks and dives heavy into pianos and vocals, setting a jubilant, cabaret-esque soundscape that the album maintains throughout. A little Arcade Fire, a little Clap Your Hands Say Yeah, a lot uniquely Pale Young Gentlemen, the songs are expertly concocted, somehow managing to be adorably quaint and enormously monumental all at once.

The piano and cello are central to the band's sound, played respectively by Mike Reisenauer (also the chief songwriter and lead vocalist) and Elizabeth Weamer. Rounding out the line-up are Brett Randall on guitar, Matt Reisenauer on drums, and Andrew Brawner (who recently played his last show with the band, according to MySpace) on bass and percussion.

Compositionally, the songs rival the most intricate arrangements of star orchestral songwriters like Rufus Wainwright and Patrick Wolf. It could easily be a musical theater soundtrack, with slow and dramatic moments as plentiful as dance-y upbeat numbers. "Clap Your Hands" is one such upbeat number, and it's delicious. Starting out a little like something from Gogol Bordello, it is perhaps the album's catchiest tune, repeatedly instructing you to "Click your heels, dance dance, grab your girl, dance dance," and so on. Mike R.'s all "Let's tear the lid off this place!" and I'm like, yeah totally, let's!

"Me & Nikolai" has a piano line around the two-minute mark that delightfully reminds me of the part in the Muppet Show opening sequence where all the muppets are entering the stage, about to sing "It's time to play the music…" In fact, the same sort of glee that filled me at that moment on that show as a child fills me now as an adult while listening to this awe-inspiring record.

When they slow it down, they do it with loads of heart. The lonesome seafaring protaganist in "My Light Maria" makes me choke up a little. Nothing drives lonesome seafaring home like a sullen cello. The other slow number, "As a War," does it again, this time inducing a full-on sobfest. Each song on this remarkable release is stunning. The final track, "Single Days," is an apt finale, using bom-bom-bom bo-dums and tempo changes to comprehensively cover the range of the album's songs in a big finish. Mike Reisenauer's vocals are smooth, gliding gracefully into falsetto territories and telling the album's stories with poise and splendor. Backing vocals chime in often, echoing and embellishing the lead, as on "An Appeal to St. Peter." The lyrics are intelligent and playful, and Mike R. delivers his vocals thoughtfully, sometimes intoning what sounds like a British accent (which always makes things sound prettier). Jolly good album, kids, jolly good.

Thank you, Madison, for spawning such phenomenal achievements in independent music. XOXO.