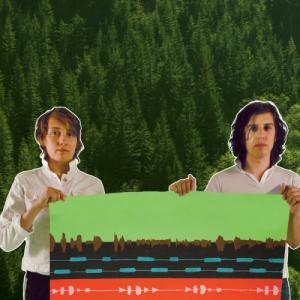 "Parentheses" by the Blow

Well, it's TIG birthday day(s) and I'm down here in California enjoying 105+ degree weather and entertaining my parents who are visiting the beautiful Central Valley for the first time ever. I'm not complaining as such, but after almost 2 years and 150 reviews for the lovely IGs, it sure would have been keen to be at the birthday bash (then again, I guess I skipped my 5 year reunion too, fives just don't work for me). Anyway, as my friend Jo used to say, Happy Fucking Birthday TIG! I digress. Back to the real point of the column, that being iPod Roulette. Unfortunately nothing decidedly birthday- or BOAT-related came up (I guess I didn't get the memo from P4K and SPIN), but I did get one of my all-time favorite songs on one of my all-time favorite albums that I discovered via TIG, that being the Blow's "Parentheses."

I absolutely adored Paper Television and "Parentheses" is possibly one of the most charming songs ever written. Hands down. It couldn't have been more charming if it was written by a group of baby pandas trying to raise money for an orphanage. That's how charming it is. Heck, Khaela makes it charming for someone to sing about the deli aisle. When was the last time you were hanging out in the deli aisle, you know, just passing the time with your honey and the cold cuts, and you were taken aback on how incredibly wonderful and charming it is? OK, so maybe in the song that's not what happens, instead the person she is with starts crying in the deli aisle, which, all things considered, is a much more natural reaction to said aisle, however, she sings it with so much sweetness that how could you not want to fall in love with the deli aisle? I know I am not built of strong enough stuff to resist that allure, and I'm guessing unless you are Dick Cheney or possibly Gargamel, neither are you.