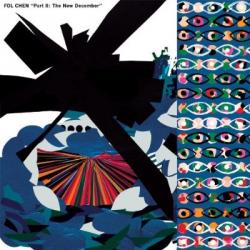 I always laugh when people say, “That sounds so 80s.” The 80s are bigger and stranger and even more stupid than you can possibly imagine. But I sort of get what “the kids” mean by use of the phrase “the 80s” when I listen to Fol Chen. They sound like many people remember the suburban-angst 80s sounding: a shiny dystopian vanilla rock-funk sundae of sound.

They’re a gang of six from Highland Park, and there’s quite a bit of SoCal sun best shown by the second track “In Ruins”. “The Holograms” somehow blends Animotion pool party carnality with the anti-sex vibes of David Bowie riding on Klaus Nomi’s icy German veneer. Singer Karin Tatoyan’s vocals are about the strongest you’ll find in this nuclear-silhouette of a neo-genre. Their second album has the acoustic-flecked Casio crunk of a keyboard-led post-punk band mixed with the MTV aspirations of kids growing up making out to Pink Floyd’s “In The Flesh” and slam dancing drunk to Prince’s “The Beautiful Ones” (both of which they have covered).

Main chaos-architects Julian Wass and Samuel Bing won’t find their forlorn tales of chemically-enhanced love doomed to the nostalgic bin, as this record is as melodically captivating as the best of the period which may have inspired it. Infectious as experimental nerve gas and addictive as a narcotic sprayed on rioting East Germans getting too near the Wall, these songs are as catchy and emotionally paralyzing as the word “Discosis” seems. One big sweeping nihilistic anthem may have made this a masterpiece, but in the meantime, this is the sound of the future dying long ago.