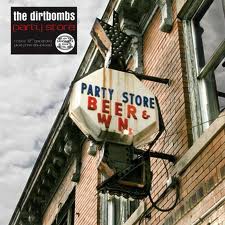 In the Red Records

I love The Dirtbombs! Mick Collins leads one of the very best American bands ever, with superb playing from musicians like Zac Weedon (The Readies) and Ko Melina, with punk-soul super producer Jim Diamond once upon a time handling bass, and the rare use of two drummers at a time. Their Ultraglide In Black full-length was a perfect example of the dear darkness Detroit injects into the underground rock scene. It assimilated the devotion of black culture fandom into contemporary kick ass rock and roll. That was a decade ago, but in the meantime, truly excellent albums and life-changing shows have been listened to and witnessed by their rabid cult of followers from coast to coast and beyond.

That said, their new album Party Store, a devotion to Detroit’s other realm of world-known sounds is noble in intention, but lacking in execution. It’s a great idea to have the band play out live classic techno music from the region from a couple of decades back, an idea I wanted to hear and love with all my heart. Opening track “Cosmic Cars” has a clipped, buzzed-out 80s rock feel that can’t be duplicated unless you dig the same kind of minimalist groove. It is actually something I would put on a fun mix-tape in a robotic heartbeat. “Sharevari” is sweetly seductive yet a bit of a piss take, originally done by A Number of Names, and its exoticism shows the Dirtbombs to be a truly urban rock band. (Very few other post-gut bucket punk groups could pull off something this spicy and funky.)

But the redundancy of “Good Life” doesn’t transfer from house to rock very well. What once was urgent when echoed by machines now sounds clobbering-dull when bashed out by a rock band. Supposedly Eno’s cards with messages containing Oblique Strategies inspired what happened here — “Humanize something without error” — but the results don’t just lack mistakes, they lack emotional breath. Maybe techno does need the machine, after all. Can’t blame a great band for trying something new and unique though. That’s what we love them for.