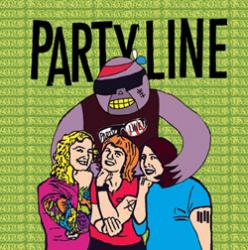 Let's talk about this five-point-five rating for a second.

On one hand, a 5.5 rating could mean average, middle of the road. If an 11 rating is what an imaginary critic would award the greatest album ever made (The Beach Boys' Pet Sounds, The Beatles' Rubber Soul) and a 0 rating is what critics would give a genuinely terrible album (Kevin Ferderline's Playing with Fire), then a 5.5 rating would mean average. It's not the greatest album ever made, but it's by no means the worst.

And by awesome, I mean "Awesome!" the way Napoleon Dynamite or Jeff Spicoli might say it.

Consider your own album collection. An 11 would be the best album you own, one you consider to be musically superb, one that you could listen to in any emotional state or scenario, one that you love so much, you'd get rid of all your other music just to have it (Radiohead's OK Computer, in my case). And a zero in your collection would be the guilty pleasure albums you own, the ones you only listen to alone, the ones you'd be embarrassed for your hipster friends to find (No Doubt's Rock Steady in my case). A 5.5 record in your personal collection could be one of two things:

It's by this definition that Party Line's Zombie Terrorist received a 5.5 rating: because it's just plain fun.

Awesome! example number one: The album cover is a DIY drawing of Party Line's three female members (front woman Allison Wolfe, guitarist Angela Melkisenthian, and drummer Crystal Bradley) and a purple, sunglasses-wearing gorilla or something. Each member is turned into a caricature version of herself that leads to the question, "Who are these girls?" (Remind you of some other three girls we all know and love?)

Awesome! example number two: Party Line plays upbeat, guitar-driven tunes about the most random of topics. Much like the Ramones, they never play more than a few chords in any particular song, and the vocals are monotone and don't range much in keys as the album progresses. But who cares? It's an all-out, throw-the-microwave-from-the-hotel-room-window party to the end.

So here's the recap.