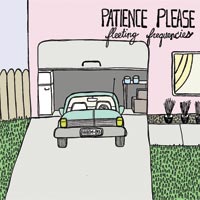 If the Ramones hung out with Elvis Costello and the Talking Heads in the lunch room and spent their teenage years paying attention in high school and filling out college applications and not experimenting with drugs and beating people up with baseball bats, they might sound quite a bit like Patience Please.

Although Fleeting Frequencies is the young band's first proper LP, it is chocked full of short, fun, catchy powerpop songs. Listening to each song is like reading a short story with guitars, drums, keys and bass behind it. Each song/story deals with teenage/early twenties love, but reveals a level of maturity and introspection not commonly found in most pop songs. The lyrics are written as prose. For example, “Science Credits” begins, “when there’s something wonderful that’s wounded, it’s always never quite enough to dull the dirge with dialogue.”

The songs on the album flow seamlessly from one song to the next. Strangely, they even flowed seamlessly on shuffle – which adds a level of complexity when choosing a favorite.

I really admire “You’re It, I Quit,” “I’ll Have What She’s Having,” “If You’re Sure” and “Buxtry Berkeley Mews”, which are more firsts amongst equals rather than standouts. They are memorable tracks that are simply well-written and well-constructed pop songs. Singer/guitarist Ray Proudfoot has a voice that is earnest and sincere. Yet it’s the understated keyboard parts that give the songs a more delicate sound and vulnerability that isn’t always apparent with drums, bass and guitars.

Overall, I thoroughly enjoyed Fleeting Frequencies, yet I can’t escape the feeling that while this record is very good, the next Patience Please record will be outstanding. There's not a bad song in the mix, yet I can see the band will grow as songwriters and musicians and feel more comfortable taking chances in the studio. Since we’re in the middle of a pennant race right now and the baseball season is really starting to get interesting, consider Fleeting Frequencies a bases-clearing ground-rule double. Mark my words, the next one will be a home run.