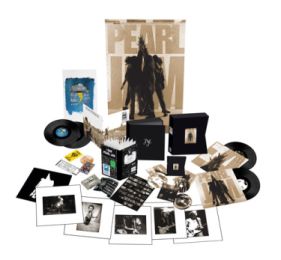 Grunge granddaddies Pearl Jam announced today that they're remastering their entire back catalogue, starting with their 1991 debut, Ten. Set for release on March 24th, the reissue will feature the original album in remastered form and a "remixed" version from original producer Brendan O'Brien, along with six bonus tracks from the Ten era. There's no word on a Justice-influenced dance remix of "Once," thankfully.

The release comes in four different flavors, including a vinyl release, a CD release accompanied by a DVD of the band's awesome Unplugged performance and a super-duper-maxi-ultra-fancy package.

Seriously, that last one is a huge collection for the diehard fan. Dig it, straight from the press release:

Throw in an Eddie Vedder lunch box and I'm all set. Preorders for the mega-pack start today at PearlJam.com.

While Ten isn't my favorite PJ album — that distinction falls to Yield, which continues to mesmerize me today — it's awesome to see such an important album get this kind of treatment. Ten and In Utero were the first CDs I ever bought and both were tremendous, defining moments in my development as a rock nerd. There's just enough new content here, even in the more basic versions, to make me drop some coin. I can't wait to hear what O'Brien does for the new mix.

What else should be given to Ten treatment? What seminal Seattle albums deserve the double-dip? Let us know in the comments below.