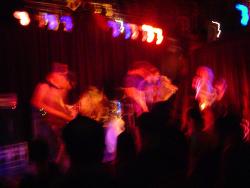 As with any other classification, "post-rock" is an extremely broad term with many subgenres branching off. Any number of representatives of these titles come to mind: My Bloody Valentine's "shoe gaze," "ambient" Sigur Ros, jazzy Tortoise, Godspeed You! Black Emperor with their near orchestral reaches. Pelican would be in there too, best described as "metal" post-rock. I dare to label the Chicago band under the obscure adjective because of the traits they share with other bands who get lumped under its umbrella.

The shared geography with Tortoise is hardly a thing, but it's worth noting since coming from the same music scene has its influences. Pelican incorporates the soaring guitar progressions, sudden drop-outs to rising build-ups, and uncommon song arrangements of other "post-rock" bands. However, it's what Pelican does differently from those other bands that makes the title even more fitting. After all, the term was coined from bands straying away from the conventional way of playing rock. This is where the metal side of their sound comes in. You know the horrible singing style used in [the majority] of metal bands, sounding like the guy is either puking or dying or needs to get laid? Completely erased from Pelican's formula. This allows for the four musicians in the band to completely let loose equally on stage.

Their instrumental sound is powerful. Hard and heavy riffs are combined with the aforementioned song arrangements for an interesting take on metal, a genre where the bands can be grating and repetitious. While they hold moments of quietude, when it's time to break out, Pelican doesn't hold back. Which is why at the show at Neumo's, I was really taken aback at how tranquil the crowd was. Hearing Pelican's well-poised heavy rock, you'd think the show goers would be tearing up the floor. Instead, everyone stood their ground with moderate head banging. Unless of course you were the guy standing next to me, who was full body thrashing enough to make up for the rest of us. Perhaps if I had a bit more in me to drink than water, I would have kicked off the dancing myself. But it was a work night, so sober I stayed, which meant I just joined the rest of the masses in some stationary swaying.

The thrashing instead occurred on stage, where both guitarists and bassist rocked their full upper bodies back and forth, to the point I thought someone might loose a instrument. Bassist Bryan Herwig looked downright exhausted by the time their set was done. We were chastised for not being inside when openers Gargantula and Clouds played; apparently only about half the crowd came early enough. Personally, when I heard the sounds of the two openers drifting out the door down Pike, I turned away quickly — terrible hardcore and punk are not my thing. Credit should be given to Pelican though, as they're big on supporting their fellow tour mates, including one band member sporting a Clouds tee.

One familiar band they shared the road with this year in Europe was These Arms Are Snakes. The struggle to describe what exactly Pelican's sound is, could be helped by a comparison to a Steve Snere-less TAAS. Both bands deviate from the beaten path of standard rock bands. And fans of both band's music will be in for a treat, as they are planning on releasing a split album. Closing out the show, Pelican played an 11-minute song which could almost be a sampler for their elusive sound. I'm not familiar with the title, but it encompassed everything they do, from slow and steady build-ups to all out grunge rock. They returned to play one encore, a song they said is new and can only be obtained on a single, which was also a long ode to their patch-work music. In a culture where every band is fit into boxes, it seems Pelican relishes in avoiding being packaged up into one.