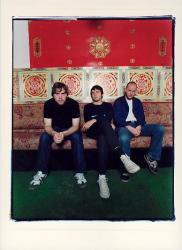 Sweden’s own Peter Bjorn and John sold out not one but two shows at Neumo's: an early all-ages gig and also a 21 and over event later in the evening. I arrived to the packed 21+ show in time to catch the majority of Fujiya & Miyagi’s opening set. The first song I heard featured them repeating the band name over and over, the first time I’d ever seen a non hip-hop act name check themselves. Fujiya & Miyagi’s electro pop was dripping with funky bass lines and there was some dancing being attempting by those fans fortunate enough to have found enough room to wiggle their arms and legs a bit.

Peter Bjorn and John took the stage to the sounds of “Sitar Folks,” one of the tracks from the bonus disk of their latest release Writers Block. From the vamp-like song, they went into “Roll the Credits.” The band was having a good time, chatting with the crowd, dancing around on stage and just generally having fun.

When they got to “Chills” things got interesting. PB&J have a poppy, hook filled catalog of songs. They could easily come onstage, play the tracks as they are on the record, chat with the crowd and smile, and everyone would go home satisfied. Instead, “Chills” was the first of four songs that were noticeably different from the recorded versions. The song was sped up and rocked out, big guitar solos and distortion erupted from the stage as the band moved away from the album version of the track. The pendulum swung the other way a few songs later as “Amsterdam” was slowed down and a lone guitar was all that was used for musical accompaniment. By this point in the show lead singer Peter Moren was stopping to introduce most songs, and he admitted that “Paris 2004” would be a bit “sheezy” (that’s cheesy with a Swedish accent) had it not been written about true events that happened to him while on holiday a few years back.

“Young Folks” followed “Paris 2004” and a pre-selected guest bongo player was pulled from the crowd to play along and dance with the band. I thought that the song wouldn’t feel whole with out the female vocal supplied by Victoria Bergsman on Writers Block, but her absence was fairly negligible and the song was as infectious as always.

After a guitar-filled version of “Objects of My Affection,” Peter announced that they had one more song left. They took the final song, “Up Against The Wall,” to places I never would have dreamed it could go, jamming out for upwards of ten minutes. Bjorn jumped off the stage while enthusiastically shredding his guitar, while Peter leaned out over the crowd, barely hanging onto the stage. This catchy little pop band transformed into a power trio in front of my eyes. The track has some background distortion on the album version but this live performance placed the guitars squarely in the center as Peter Bjorn and John suddenly became the Swedish version of Cream. The band briefly left the stage before Peter returned to sing the chorus of “Up Against the Wall” a cappella. Bjorn and John joined Peter on stage to close out the evening with “Teen Love” and “Collect, Select, Reflect," the later a slower track from their as yet un-released in the US self titled debut album.

I never would have expected the show I got from Peter Bjorn and John. I anticipated a quaint little pop show that would sound more or less like the records they’ve released. What I got instead was an enthusiastic live performance that showcased PB&J’s varied abilities as a band. Now if someone can just convince IKEA to sell PB&J along with their Swedish meatballs and pickled fish we’ll be in business.