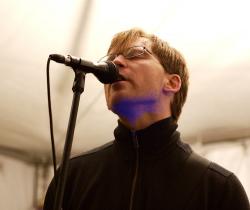 Some would say that Friday was a horrible day for an outdoor show. Fat raindrops were pelting down on the pavement. In North Seattle, there were even bouts of hail. Nonetheless, as traffic continued to congest and congeal on Denny east- and west- bound on this dark, dreary and rain-soaked Friday, band Peter Parker took the stage at the South Lake Union Discovery Center where the Northwest Hops Traveling Beer Festival was well underway.

We arrived right on cue as the band was setting up. Mona seems sweet and quiet. She plays a bass guitar that looks twice her weight. She wears it low and plays it patiently. Singer, Matt, looks clean-cut, wears thin-rimmed glasses and looks as though he could have just gotten off of work as a software engineer or project manager at Microsoft. He makes jokes throughout the set, like, "If you didn't like any of the songs we have sung yet, you will surely like this next one we're about to sing for you." On the guitar is Josh. He is tall, and spent half his time on stage hiding under a black hoody, playing to his bandmates versus the crowd, and the other half jamming in true rawker form. Steve, the drummer, has forearms you know will knock the crap out of forthcoming beats.

The band crammed onto a tiny platform under a white canopy facing a crowd who huddled 15 feet away under another tent warmed by heatlamps. Frontman, Matt Parker, jeered at his fans…"This is a demilitarized zone," he said, "you better not cross this line!" But the fans would not surrender to the band and close the gap, instead they remained under the safety of their tent. You couldn't really blame them; the weather was unrelenting, and no one wants rain to dilute their beer.

Peter Parker's sound is spunky, with upbeat playful songs like "Nevermind the Astronaut," followed up with epic 'monster ballad' instrumental-type songs like "Fanfare for the Common Man."

Apparently the band isn't playing out much these days because they have been writing and plan to go back into the studio soon (yay for us!). This is great news for those of you who were shaken by their four-year hiatus from 2002-2006.

After the show, I asked the band if they had anything to say to the TIGs. Almost immediately Josh said, "Yes, my toes are cold!" 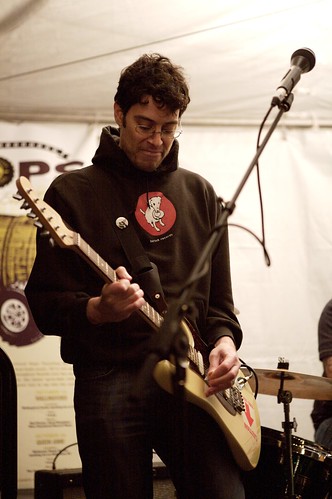 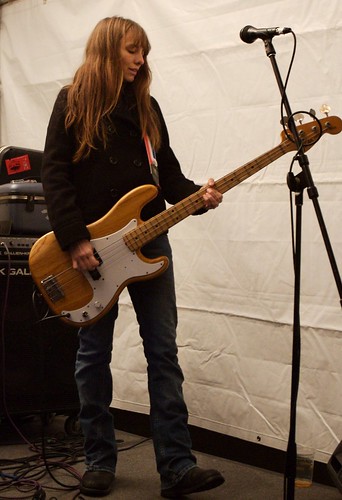 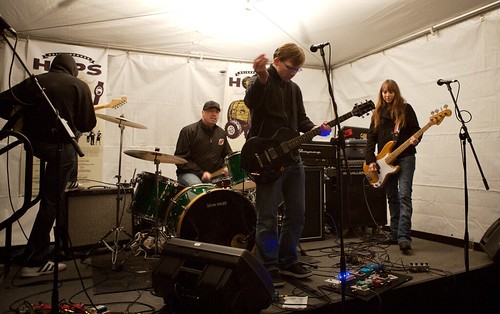