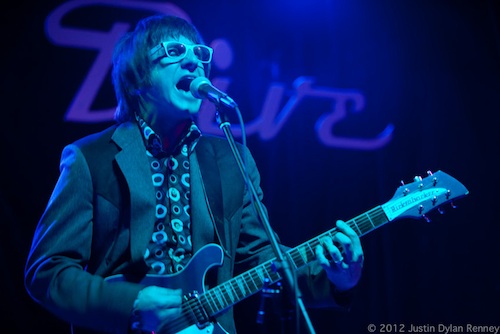 Remember how I told y'all to be at The High Dive on Friday to see the most excellent PDX band Blue Skies for Black Hearts take the stage? I hope at least some of you made it out, because they TOTALLY ROCKED IT. (duh, like they wouldn't)

Anyway! There was a last-minute band addition, so BS4BH played first, and super-early, starting their set just after 9pm. I am happy to report that even though the crowd was scarce, the boys gathered an impressive menagerie of dancing (in Seattle? WHAT?) groups near the stage by the time they were 2 songs in to the set. The boys in The Ames (the Belligham-based band that followed) seemed particularly impressed, and were very enthusiastic about getting down to some grooves. Again: dancing? in Seattle? WHAT. Just another of the many side-effects Blue Skies offers when rocking their audiences' socks off.

So after a second live show, I maintain that these guys are one of the tightest, most well-rehearsed bands I've ever seen. They put on an impressive show, melding retro-notes and lyrics with modern indie-rock and a tinge of poppy, bouncy good vibes. Lucky for me, they live in Portland, so frequent sets in Seattle are possible!

I am definitely going to make it a point to see them every time they're here, and if my words can't convince you to give them a shot, I think these photos from Justin Dylan Renney will.

Sitting on the Edge
A World Without Love
Damn Those Girls
Caroline Make Up Your Mind
It's Gone On Too Long
Taking Advantage
The Past
Siouxsie Please Come Home
The Sitch
Majoring in the Arts
You Gotta Quit Kicking My Dog Around (coming soon on a new album!)