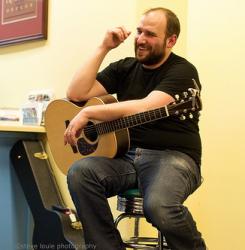 For the past couple weeks (and through the end of April), Dave Bazan has been going across the states playing intimate house shows. Most of them, if not all, are pretty much sold out as they are limited to only 35-40 folks.

Recently he played a super casual intimate house show (actually it was more like an office show) in Troutdale, OR.

Troutdale is about a 20 minute drive east of Portland – pretty easy to get to but it's a small town off some random exit off the Interstate 84 East. The office where this was held is below street level and it was just a plain work office with just a huge copy machine and reception desk.

The show started at around 8pm and Dave played to around 9:30. Kudos to the guys who brought in a couple of six packs and shared them with some people.  If you've ever been to any of Dave's shows (even when he was in Pedro the Lion), you know he opens up a question and answer period at various points in his set.

A majority of the questions focused on his personal life and his songs from Control, including the meaning of "Priests and Paramedics", how he had to explain to his wife about the song "Options", and that one song his wife forbade him to perform for a few years.

On the light side, he talked about the bain of Pitchfork, good movies and music of late, the process of his songwriting, how he liked the sound of the trains that passed by during his set, his first band 'Coolidge' with Damien Jurado and his new album Curse Your Branches coming out this summer on Barsuk on August 25th.