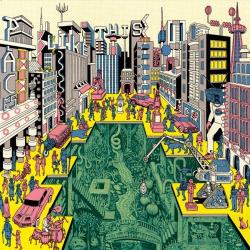 Your summer fun album is here! Oh wait, it’s August now, isn’t it? Dang, somebody better tell Architecture in Helsinki, because their new album Places Like This is full of more sunshine than a summer in the Mojave and more playful antics than a steamboat full of bunnies. I’m not saying that you’ve never heard anything like it, I’m just saying that you’ll probably not hear another album this year packed with so much energy that you’re afraid if you drop the disc it will explode as all that concentrated power tries to escape in a vast musical detonation.

Although they could easily fit into the Scandinavian music scene with their synthpop sound, the vast gaggle of players (there’s only eight of them) of Architecture in Helsinki actually hail from the geographic antipode of Scandinavian – that being Australia for those of you without a globe handy. Places Like This is their third full-length outing and it has all the earmarks of a band that has it figured out, they really know where they are and where they’re going. The album itself was recorded in less than two weeks, and you can tell they recorded it with the liveliness of a live show, with sound bouncing off all the surface, that in itself makes the album such a pleasure because it is one of those rare albums that captures the fun the band must have had while recording it – it is a dance party put to disc. You can tell right from the opening moments of the album, one that is one part Flaming Lips, one part Postal Service, one part Suburban Kids with Biblical Names – heck, any equation of other musicians doesn’t do it fully justice. Just listening to the opener, “Red Turned White,” and you find yourself awash in an anarchistic reverberation that borrows from both classic rock and disco becoming both anthemic and intimate.

Of course, this album might be made up of songs that sounded like Paris Hilton and Britney Spears dueting on a German cover of “Total Eclipse of the Heart” and I’d still like it if not for anything beyond “Heart It Races.” If you hear any song this year, make it this. If you hear anything song this year, make it this. Try to imagine Jens Lekman visiting M.I.A. in the recording studio, suddenly fall madly in love and record until they pass out. That’s “Heart It Races” – it’s a neotropical technogeek work of gospel genius. Of course, I might be falling prey to its outrageous infectiousness, with the nonsense vocals driving the melody and the dueling vocals.

Luckily for all concerns, the rest of Places Like This is infinitely better than the aforementioned collaboration between Brits and Paris. “Hold Music” is a 21st century interpretation of the B-52s, right down to the disturbing Fred Schneider doppelganger while “Feather in a Baseball Cap” is the Faint Lite, although you wish they’d really let loose on the song. In fact, the biggest problem with Places Like This is that sometimes you wish Architecture in Helsinki would really let loose. Not that they aren’t loose on the album, but at times you can feel the underlying enthusiasm of the band trying to scratch its way to the surface of the record. “Like It or Not” takes a page from Islands/Unicorns with its “Muppets in the Caribbean” sound while “Debbie” takes this to its downright creepy extreme where Cameron Bird’s vocals almost sound like Grover recording an electroclash hit.

The silky-smooth “Lazy (Lazy)” just sort of oozes out of the speakers with a killer bassline that drives along the melody until the gently strummed guitars kick after the fingersnapped chorus. It is like ultimate 70’s pop revival without all the campy baggage that usually comes along for the ride (see the Scissor Sisters). The song breaks down into a Gary Glitter-like foot-stomper during the bridge and becomes a brilliant mix of sweet and sour. “Nothing’s Wrong” might be a window into what a world might be like if Modest Mouse decided they wanted to be a dance band instead of arena rock giants – truly this is a strange world. The album concludes with “Same Old Innocence.” a synthrocker that has tastes of the Cure and Depeche Mode, giving Architecture in Helsinki more teeth than what the rest of the album might imply.