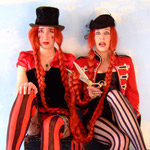 Pretty Vermillion Lies sang at the Can Can

Underneath the Pike Place Market is a basement grotto called the Can Can, a small bar/stage that you wouldn't find by accident. Shows are mainly cabaret-oriented, featuring dance, contortion, acrobatics, and burlesque, but they also book a few bands who fall under the far-flung flag of cabaret. I'd found out that Vermillion Lies was going to play there, a sisterly duo who likes to play DIY instruments, so Thursday night found me scrunched into a corner with my own sister to watch the show.

The openers were a house act called "The Can Can Castaways," a group that does everything from aerial Russian dances to belly-dancing burlesque. One duo performed a clock-work interpretation of "Coin-Operated Boy" by the Dresden Dolls, while another group threw out a titillating remix of "You Make Me Like Charity." My favorite was a takeoff from the usual fare, a bag lady/drag queen solo where a guy came in hunched over a glitzy walker and ended up spitting plastic Easter eggs at the audience with a crazy look in his eye. After each number, you could tell how much the audience was enjoying themselves by the noise level of whistles as the performers ran off stage.

Vermillion Lies started out with a costume box call for the audience, asking them to dress up along with them. A small group rushed to the box and went back to their seats with oddities; I ended up with a heavy silver wrap with tassels that kept me warm the rest of the night. Most of the songs involved some sort of audience participation, from waving lobsters in the air to sing-a-longs ("Okay guys, even in Russia the audience sang along. How does this sound? Lalalalalala…"). Lyrics spanned the range of global warming to circus fish. Kim and Zoe swapped turns with the lead vocals, mashing up smoky siren voices with purposefully over dramatic lines — "You are just like my garden trowel/I don’t know what to rhyme with trowel/I’ll stick you deep down in the dirt/and you can laugh when it hurts [ahahahahaha]."

But beyond the quirky lyrics, the most curious thing about Vermillion Lies has to be their unusual choice of instruments. There was a large trunk on stage, and at the beginning of many of the songs Kim would lift the lid; the audience would chorus, "What's in the box?" (incidentally, the title of their newest album), and Kim would pull out one of their eccentric musical apparatuses. During the course of the night, a barbeque grill, typewriter, and plastic lobster all made appearances.

When I go to a show, I expect to listen to good music and go home satisfied. But on Thursday night, we had fun; the band allowed the audience to play along with them in one way or another, and I enjoyed being a part of their creativity. The hands-on cabaret performance stylings of Vermillion Lies will appeal to fans of the Dresden Dolls or Jason Webley, both of whom are noted for their own unique styles of audience interaction.