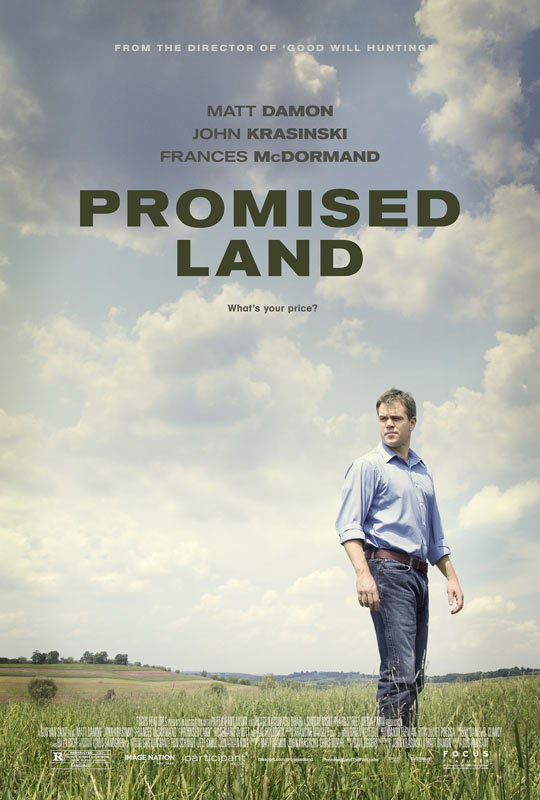 Promised Land starring Matt Damon is your best choice this weekend if you're seeking a picturesque tale of how America's rural heartland is in danger of being steamrolled by big energy with a bit of romance tacked on. Less of a great choice if you want either some hard data on fracking or an especially compelling film. A lightweight take on environmental devastation that's well constrained within a familiar narrative. Naive (or willfully ignorant) boy with big ambition turns a blind eye on how his corporate masters do business. Until wiser folks and the double crossing sneaky big money interests eventually shake up his world view. Promised Land is the sort of film that feels interesting enough while you're watching, but even given the weighty subject matter isn't especially likely to stick with you longer than the time it takes to get to the parking lot.

Matt Damon is a highly successful salesman. People sometimes say to be good in that job you need to believe in what you're selling. And Damon is a true believer. Specifically that agricultural towns have always been more dependent on big business than they believed (his family's town was devastated by a manufacturing plant closing) and that selling natural gas rights to their land will allow them to keep the dream alive. Over time it becomes clear he maybe harbors internal conflicts bordering on a deep resentment of that rural life. At first it's subtle, for example it's mentioned that his success in sales isn't just in volume but in getting towns to accept far less than his company is willing to pay. But eventually as events push him into harder spots more of his personal anger boils to the surface. His internal view may make him out as each town's savior but the reality is that he's playing as fierce a game of hardball as anyone else.

As the picture's man in need of redemption he has limits, which he increasingly struggles with over the picture's arc. Early on the town begins to get squirrelly over potential environmental concerns with the fracking. Damon is at first resistant, shrugging them off. Clearly unable to believe the horror stories on the Internet about either because he's trusting or because his livelihood depends on it. Stuck in the town pending a vote as to whether the natural gas development will be allowed Damon increasingly gets to know the town and his confidence becomes less rock solid.

There's a bit more going on of course than meets the eye – which I'm purposefully going to avoid mentioning for those who will see the film. Truth be told there's more, but not a lot more. The most appealing parts of the film are Gus van Sant and cinematographer Linus Sandgren's beautiful visual renderings of the region combined with Frances McDormand as Damon's pragmatic, we're just here so I can support my kid, partner. Even beyond these highlights are several  individually solid performances and effective moments. Particularly early in the film as residents are excited to see the natural gas buying team who are preaching the good word about money from heaven. Overall though it's just not especially fascinating character wise nor enlightening environmentally speaking. A good think to mark for your Netflix queue – but one can do better with your holiday season in-theater choices.