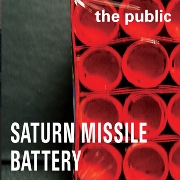 I'll admit, I had to make myself listen to Saturn Missile Battery by The Public a few times before I could really start to hear a mass of things that I truly liked. By that I don't mean that all elements of the brooding four-piece went discounted; the general mopey-spacey-rocky hybrid sound is one I generally quite like. But, at least the first or second time I heard the record, I thought, "Yeah, ok, heard stuff like this before" as I was stretching to click to the next track.

But then something happened. I put down the other work that was occupying my thoughts (pesky day-job!) and instead pulled out the lyrics for the album. I turned up the volume and listened a bit more carefully. And then I finally heard what makes The Public better than, or at least on par with, your average neu-goth-wave band. I heard layers of melodies, awash with dirty guitar lines backed with clean, tactile, tight rhythms. I heard serious drum fills, organic bass wanderings. I heard bits of the past: Joy Division, Bauhaus, The Smiths, The Cure, The Cult. And I heard lyrics that suddenly didn't seem as cheesy as I originally chalked them up to be. I heard more talent than I'd originally given this New Orleans band credit for, and now that I hear it, I'm ashamed to say I was about to write them off.

The slow-coming of the record could be due to my workday attention span, but I declare it's also because we're so inundated of late with bands that sound like The Public that it's tough to trust much of anything in that genre save for the few solid new-comers to the historic staples. What sets The Public apart from the pack, however — aside from the fact that nary another similar-sounding band is likely coming out of New Orleans right now — is their authenticity. The Public aren't jumping on this retro revival for kicks or fame (though they could get it); they're putting their musical talents into a band that, self-professed, makes the kind of music they want to hear. If only others could be so sincere (yeah, Bravery, I'm hinting at you).

"The New Victims," toward the end of Saturn Missile Battery, is especially a highlight. The exuberant harmonies juxtapose the dark bleakness of the scornful lyrics, which assess our all-too-common modern-day ambivalence ("She woke up late to the sound of the world creeping in/She thinks it's probably nothing/Rolls over… meet the new victims/Hands in pockets/They face tomorrow with strict ambivalence"). Saturn Missile Battery closes the album with a firestorming guitar solo and jam session, the band bringing all its fine elements (heavy and metronomically precise rhythm, brooding yet danceable bass and gritty and glorious guitar riffs) to their natural peak.

In "Connected by Wires," a song whose lyrics tackle the phenomenon of having friendsters versus friends — where we're more comfortable e-talking with those we may never meet yet having a hard time making connections with the people standing next to us night after night in the same rock club bar line — is pure throwback. The lyrics may discuss a new development in social behavior, but the music is total Joy Division/Bauhaus/isolate-me-in-a-room-with-my-record-player-and-let-me-wallow — which, if you think about it, aptly fits the subject matter of the song.