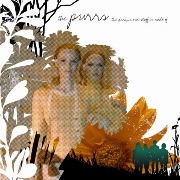 The Dreams Our Stuff is Made Of

I first heard The Purrs' The Dreams Our Stuff is Made Of as a podcast of their live appearance in the KEXP performance space. The opening rendition of "She's Gone" kept me pleasant through a 12-hour workday of frustration, both with the offline printers and the sushi delivery people who simply didn't understand the concept of a doorman.

The appearance on KEXP — through which Jima and company played a lovely sampling of Dreams… — led me to think The Purrs would be another great local Seattle group to whom I could introduce many a Clap-Your-Hands-Strokes-Interpol-centric New York friend. "She's Gone" is simply a wonderful song — full of the grit and grunge of late-60's, early-70's rock. Upon hearing The Dreams Our Stuff Is Made Of, I was delighted to start the record off with the same track, echoing with delicious reverb and that same crunchy riffing of dusty guitars. 70 minutes later the record proved to be a simulacrum of the past: a giant amalgamation of great sounds of the wonderful giants of rock; parts of Bowie and Reed and Iggy (or more specifically Ziggy, The Velvets, The Stooges) are thrown together into an orderly, and often lovely, rock record.

Dreams… is the first full-length by the unsigned, basement-dwelling group. Full of talent and late-60's telecaster grit, their past two EPs garnered the type of critical praise that is the wont of all hard work and dedication. That this 70-minute plus LP is recorded entirely with SM-57's and -58's (traditional Shure instrument and vocal mics, each easily found for under a hundred dollars at Guitar Center) is only an addition to all the attractiveness of this band. The cigarette-filled voice of a lead singer, a mist of smoky reverb over every song, guitars that sounds like screams, and screams that sound like guitar solos…indeed, the idea of this band is extremely seductive. But the one unsurpassable reality of this band is that they're a scrim, simply silhouetting traditional great rock bands.

There is an incessant tambourine on "Loose Talk" that, while it hints to the Velvets — like all incessant percussives — it hints more to the way the Brian Jonestown Massacre enjoyed hinting to the Velvets. Hints of hints, copies of copies; simulacra. On the title track, Jima waxes: "And I'm walking through walls / I'm not taking no calls / These are the dreams our stuff is made of." The Purrs set their mark high by emulating nothing but the greats of the past on The Dreams Our Stuff is Made Of; when their originality breaks through, there is a great chance they'll be as great as our dreams. Dreams… is a 70-minute tribute to great, anti-______ music. As a result, it's pretty damn good. Thus I am obliged to give this record a 5.7 — meeting the 0.0 of pure shite and 11.0 of perfection halfway: exactly where this record exists (with an extra .2 for the beauty of "She's Gone).

The title of this record is apt in telling they now have only the ingredients of their dreams — talent, devotion, obsession with great music — but haven't learned to cook anything yet but their own mother's meatloaf. Genius necessitates creativity; success necessitates time.