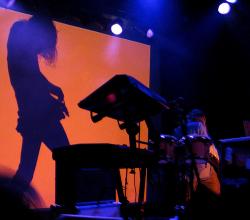 Ratatat at the Showbox at the Market

Ratatat, the hot-shit electro group from New York, has been on fire lately. Their most recent album LP3 has gotten mostly rave reviews from critics and they’ve been attracting large crowds to their shows. The last time they were in Seattle was less than two months ago and were originally scheduled to play at Chop Suey but moved to Neumo’s at the last minute – and still sold out the much bigger club. That brings us to last Friday’s show at the Showbox at the Market, which was also sold out well in advance.

Nearly every review I’ve read of LP3 suggests singers that would sound good layered on top of Ratatat’s instrumental catalogue. That’s fine but I think it misses the point. As Simian Mobile Disco put it so eloquently and simply, “it’s the beat.” For Ratatat, whose songs have no lyrics and (like Justice, SMD and Daft Punk), they work within the constraints of the 4/4 beat and they pull it off remarkably well. If the quality of the beats was inferior, the group would flounder. With LP3, as most reviewers have noted, the group moved beyond programmed beats and electronics in favor of a sound that (while using those) also emphasizes live drums and heavier, more pronounced basslines.

The duo of Evan Mast and Mike Stroud had a third member of the group in tow that played keyboards and provided most of the programming for this show. Stroud and Mast seemed to alternate between playing a snare drum, bass and guitar. They mixed effectively mixed using programmed parts with live instrumentation and at times the result was dazzling. They found a balance between live instruments and programmed beats. Playing against a background screen that provided visuals to accompany the songs (including one song that distorted the Paul Simon video “You Can Call Me Al”), the band played (from what I could tell) many of the songs from LP3 as well as a few from their two prior records, Ratatat and The Classics. I believe they opened with “Brulee” – a tropical, summery song from the new record.

I was on the main floor for the show and the large, young crowd wanted to dance, even though they were limited with the room. I had people bumping into me for most of the show, making my notes illegible. I don’t envy my friend and photographer Jeanine Anderson, who was taking photos and was much, much closer than I was.

The group took the stage at 10:45 when the posted schedule said 11:00 and they finished up just before midnight. The interaction with the crowd was minimal but the point was to get the crowd to move – which they did (as noted, space permitting).

The first act for this show was E*Rock, a programmer whose face was hidden behind a black mask. His beats were simple but effective (and, save for the first song or two where he had an accomplice playing a snare drum, entirely programmed). I wondered who the masked guy was (and admit I was a little lazy on the research going in). Was it someone secretive, like Burial? It turned out his brother is Evan Mast.

On LP3, the songs sound almost constricted coming through your headphones or speakers. Live, though, the songs and beats come through larger and more expansive in the (pretty) big Showbox.