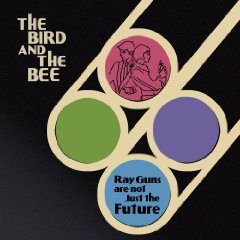 Ray Guns Are Not Just the Future

Ray Guns Are Not Just the Future is a perfect title for the new record from the LA duo The Bird and the Bee. It is also the first truly great pop album of 2009.

The Bird and the Bee is singer Inara George and producer/multi-instrumentalist Greg Kurstin and Ray Guns is the second full-length record and it’s released on Blue Note, the traditionally jazz imprint of EMI.

What makes The Bird and the Bee work, though, is George’s harmonies. They do fit perfectly over Kurstin’s melodies and arrangements but it’s the vocal range she exhibits that make this fit together. On a song like “Birthday” her voice has a rich lushness that cannot be replicated with the correct software. She is a uniquely talented singer who can sing flawlessly within any necessary range.

The first single is “Love Letter to Japan” and it’s a dazzling pop song with a big sing-along chorus on top of a catchy melody and irresistible beat. It is one of the few songs that really sound contemporary (“What’s in the Middle” does too), with its multilayered arrangements. It reminds me a lot of Britney’s “Toxic” because the melody has so many things going on at the same time but still holds itself together as a catchy and instantly accessible pop song that should be played in dance clubs.

“Witch” is a sexy pop number that could, in a pre-Daniel Craig world, be a theme to a James Bond movie. It has a seductive tempo that fits well with George cooing “yes, I am a carnival; a house of mirrors; I will con you; and all my tricks, and all my magic, will keep you dizzy with desire”. Thematically and musically it is very similar to Tina Turner’s “Goldeneye”, but it is much, much more homage than plagiarism.

Kurstin understands the craft of arranging pop songs as well as anyone today. He produced Lily Allen’s forthcoming album It’s Not You, It’s Me, amongst an impressive resume of credits. It shouldn’t be too much of a surprise than that the chorus on “Ray Gun” sounds exactly like one of Allen’s hooks. It’s a slow ballad that only picks up once the chorus builds and has George singing over a piano sound. Unlike much of the record, it’s much more sparse and minimal – even the drum beat is turned down here.

“Diamond Dave” pays tribute to the former lead singer of Van Halen. “When you left the band I couldn’t understand it, but now I’ve forgiven you now that you’ve recommitted” George sings here. It’s a sweet little bubblegum song that sounds sincerely about someone famous for excess and extravagance.

Kurstin’s production and melodies walk a difficult line effortlessly in avoiding sounding outdated while borrowing from retro pop sounds. Ray Guns Are Not Just the Future fits so nicely because he gets that hooks and catchy choruses are timeless. He’s not borrowing from a specific time as though pop is an artifact to be mined for the sake of ironic nostalgia but instead using a full arsenal of sounds to craft a singular pop album. The Bird and the Bee is a great partnership not just between Inara George and Greg Kurstin but also between melody and harmony. There are a lot of ideas coming out of Ray Guns are not just the Future but hooks are right up front. Repetitive listening to this album does reward you with more layers so you can pay attention to how the arrangements are laid out.

Pop music can only succeed if the songs are catchy and nearly every track here succeeds in that regard. In one sentence, Ray Guns are not just the Future is a pop record made by and for pop music lovers.