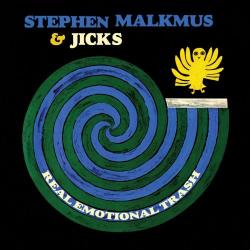 I think I've said this before, but if anyone can survive the '90s modern rock scene to record that seminal, late career album when he's in his 60s, it would be Stephen Malkmus. I, by no means, am a Malkmus-superfan. Don't get me wrong, I obviously think he's excellent, but I've never stayed up all night listening to Slanted & Enchanted, I've never tried to track down Malkmus in Portland, I've never attempt to start a nascent religion based on the lyrics by the mop-haired troubadour. Maybe people might feel deeply offended that I might dare to offer my opinion on a work by Malkmus without being intimately familiar with Pavement, his solo work, the Silver Jews, Kim's Bedroom, the Crust Brothers and all other projects that Malkmus has been associated with. That is just the sort of hero-type figure he's become. That being said, dang, Real Emotional Trash is great. It probably is the most balanced of Malkmus' solo works, throwing us some perfect pop gems and extended jams and adding to the mystique that is Stephen Malkmus.

Real Emotional Trash marks the first album by Malkmus and his Jicks with former Sleater-Kinney drummer Janet Weiss, which I suppose makes the Jicks a bit of a northwestern supergroup, combining powers of two of the biggest modern rock bands of the last decade. It is hard to tell exactly what influence Weiss has on the Malkmus sound, but there is a tighter rhythm section to a lot of the tracks and Malkmus gets a little more aggressive with his rock and roll. This is apparent right off the bat on "Dragonfly Pie," a song that starts off like an old school '70s rock monster with scorching guitars and thundering drums wrapping around Malkmus' distant and echoing vocals. Yet, somehow, the track wanders its way out of the wilderness and finds a sweet core where Malkmus' pop soul shines into the chorus. This is why we love Malkmus: He knows how to create musical drama, and that is exactly what "Dragonfly Pie" is, a story arc where the music tells the tale.

Malkmus hasn't lost any of his skills in crafting pop gems. "Out of Reaches" is up there with some of the great, laid-back tracks he's put down since Pavement broke up. His sing-song vocal style, half-spoken, half-sung, almost act more like an instrument than a way to convey any clear message, but that is one of the real charms of Malkmus. In this vein, one of the high points of Real Emotional Trash, and heck, in the whole Malkmus discography, is the downright cheery and hummable "Gardenia." This song is a perfect combination of the '60s pop sound that was perfected by Papas Fritas and the slacker sounds of Malkmus, featuring both Malkmus' ramblings and drifting female backing melodies that break us all into the chorus. You could almost see the song as the theme for some sort of Mary Tyler Moore Show redux (and really, that is meant to be a compliment). "We Can't Help You" is a warm, piano-driven song that, again, reminds us why we like the laid-back, playful nature of Malkmus and the Jicks.

"Hopscotch Willie" does skirt dangerously close to '70s jam rock in its rhythm and melody, but Malkmus thankfully doesn't truly go all Garcia on us. This is the real balancing act that Malkmus has to play, attempting not to become a latter-day Grateful Dead with his dalliances into prolonged hippie jams while at the same time not getting stuck just writing three-minute pop songs for the rest of his life. Some of these tendencies are extenuated on the title track, a 10-minute-plus epic that sort of rambles along, a little more like Neil Young or Built to Spill than Jerry and the gang, but the indulgences are there as Malkmus and the Jicks really break it down. However, most of the time, he accomplishes this feat, like on "Cold Son" where you can hear the spontaneous nature of the music but he keeps everyone in check. Of course, it helps to throw in obvious Malkmus-isms like "Who is it that said the world is my oyster? / I feel like a nympho stuck in a cloister." "Baltimore" is another straight-on rock number, yet for some reason all I can think of when I hear it is an amplified version of "The Wreck of the Edmund Fitzgerald." Probably the best of the "rock-orientated" tracks on Real Emotional Trash is "Elmo Delmo," an almost psychedelic track where you can hear Malkmus muse about purple Pumas and shamrock justice, among other odd topics while the guitars take on much more of a Matthew Sweet sound. Really, the driving force on "Elmo Delmo" is the guitar work as it really fills 75 percent of the track itself.

Sure, there is nothing as sublime as Malkmus' first solo single, "The Hook," or as outlandish as "Baby C'Mon," but really that was the transitional phase from Pavement in the first place. Instead, the depth that Malkmus shows in Real Emotional Trash proves that even if some of the die-hard Pavement fans have abandoned him as he's stuck out on his own, it is really their loss. He is one of those songwriters who just makes it sound so easy to write songs that can wrap up the listener. This is probably why Malkmus has been able to enjoy such a long career of almost universal love in an arena that makes it a point to drive you into the ground if you don't meet their standards. Somehow, Stephen Malkmus has been able to keep us all entertained and Real Emotional Trash might just be him hitting his musical stride after almost a decade on his own.