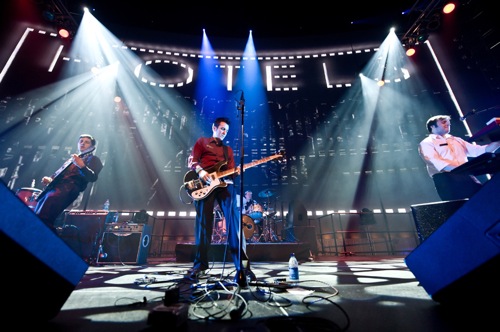 The new Hotels album On The Casino Floor came out digitally yesterday, and is a concept album about the earth exploding in tandem with the grand opening of the first casino complex in space (awesome!) with the single “The Bat Watusi” up at the front of the line. Solidly built around the pulsating bass and sci-fi sounding synths, the song shows strong promise of what should be a very solid and ambitious third album from the group.

For a band named Hotels, one can only assume it appropriate to incorporate the element of a casino into their grand scheme. Blake Madden, who split his time between New York and Seattle, formed the group in 2003. They released their solid debut in 2005 titled Thank You For Choosing… and Madden subsequently moved to Seattle full time in 2006. The group grew into a more accessible sound in 2009 with their release Where Hearts Go Broke. Tracks like “Leilani” and “Port of Saints” contain some of the same fantastic fast paced drum beats and looping bass lines that make comparisons to New Order appropriate at times. They found a contrast to that sound in their song “Near The Desert, Near The City”; a softer, possibly M83-inspired track.

This Saturday they’ll be performing these (and more songs from the new album) at Columbia City Theater alongside Royal Bear, Devil Whale, and guest DJ/Emcee Marco Collins of KEXP. As if that wasn’t enough, there will be a Wheel of Fate, which you can spin to win Hotels merchandise. There will also be a costume contest for whoever dresses in their best ‘casino’ attire. (Whether that means a sharply dressed high roller or a sweatpants-wearing slot junkie, however, is up to you.)

To win a pair of tickets, send an email to tig {at} threeimaginarygirls dot com by 10a on Friday {2/25} with the subject line
“OnTheCasinoFloor.” We’ll pick one lucky winner around lunchtime on Friday and notify you that you’ve hit the jackpot! And poof, you and your +1 will be on the guest list.

Keep in mind, just like a real casino, this show is 21+. Tickets are available for advance purchase through Brown Paper Tickets.