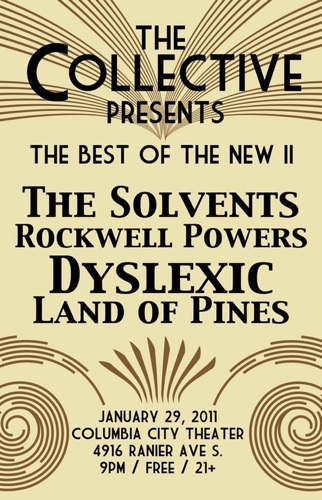 The folks over at the Collective — which are combined forces of our friends over at Sound on the Sound, Artist Home, and the Warehouse — are putting on a free show this coming Saturday {January 29th} over at Columbia City Theater, and we think you should go. Period.

I had the pleasure of attending the last (and first) Best of the New, and I’ve got to say — that shit totally kicked my ass. I stumbled into the near-dark of the main theater, lit only by barsigns, to a hushed crowd circled around Kimo Muraki — who was alone in the middle of the floor. He performed a good twenty minutes (completely unamplified) with an acoustic guitar, and the moment his set finished, the main stagelights came on and the room’s attention shifted over to the next group: Youth Rescue Mission. While the music wowed the listeners, the tandem effect in and of itself was enough to make us realize that something special was going on here, since the production of the bands had obviously been crafted with great care.

We just knew that we were into something good.

So, it’s by sheer logic that we imagine this Friday’s show will be just as rad, with the likes of a handful of new bands taking over the room for our listening pleasure. Oh, and did we mention that the show is free? It’s a 9p start — all the bands are worth a listen, so don’t be late. We’ll see you there!