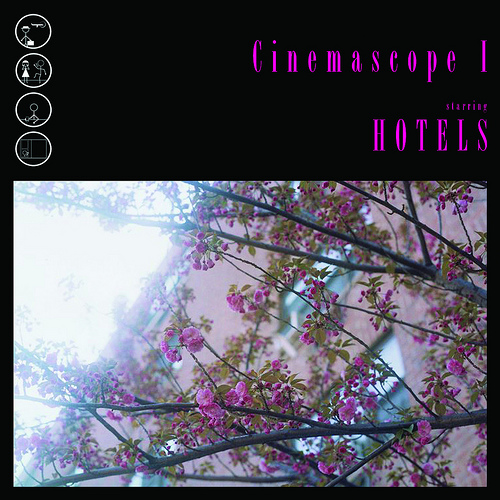 Seattle post-punk(ish) new wave band Hotels just released their latest EP Cinemascope I, the first of a series of three EPs that the band plan to put out. With this four song EP, Hotels sound as solid as ever; from the looping, jangly sound of album opener "The Reddest Rose" to the creeping bass line from front man Blake Madden on "Unknown Quadrant." Their 2011 release On The Casino Floor was a concept album about a casino in space (seriously!) and that aesthetic is returned to on the psychedelic, six-minute closing track "True Crime." You can listen to {and download} the entire EP at Hotel's Bandcamp page here.

In celebration, Hotels will be playing a show this Friday {4/27} at Columbia City Theater, and we'd love to send you and a friend to the show on us! Just shoot us an email to tig {at} three imaginary girls {dot} com anytime before the end of the day on Thursday — yep, that's tomorrow! — for a chance to win. Be sure to put "SendMeToHotels" in the subject line so we know it's you.

And ps, we'd be crazy not to mention that Noddy and Sports will be opening the show: in case you're not familiar, Noddy started as the solo project of former Man Plus front man Jared Mills, and has since evolved into a fully formed 5 piece band, releasing their 13-track debut album last fall titled Murder! Dance! Kill!. And Sports are equally synth-laden and just as influenced by 80's new wave, so be sure to wear your dancing shoes. Their latest self titled release can be found in name-your-price form at the bands bandcamp page here.

As an added treat, Hotels will be joined on stage by Adra Boo of Seattle soul/groove duo Fly Moon Royalty. All of this for a mere six dollars? Seattle, you'd be silly to skip this show. We'll see you there!