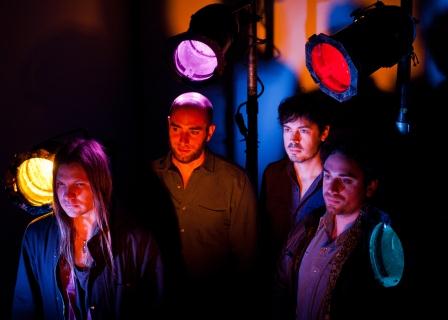 So far, the self-titled first full-length from Poor Moon hasn’t received as much notice as some other Fleet Foxes-related acts, but that is certainly no fault of its own: on Poor Moon, deceptively simple arrangements of lilting vocal melodies and folksy instruments float just above preciousness in a macramé hammock.

Containing sounds drawn out of every aisle of a vintage record store – from Neil Young to barefoot, school bus-dwelling hippies and long-forgotten glossier pop groups – Poor Moon unsurprisingly bears a lot of resemblance to Fleet Foxes, especially on album closer “Birds.” If we're going to generalize, for the most part, this side project is Fleet Foxes shorn of their more experimental and psychedelic elements. I could forgive you for considering Poor Moon to be Fleet Foxes declawed, but I couldn't agree. For my money, the restrained elegance of Poor Moon is exquisite.

You don’t have to take my word for it, though. Poor Moon will be playing at Neumos with Tom Eddy + Pollens on September 20. Tickets are only $12, but if you’re feeling lucky enough, you might get in for free! Just shoot us an email at tig {at} threeimaginarygirls {dot} com with the subject "SendMeToPoorMoon" anytime between now and 2pm on Monday, September 17. We'll choose a winner Monday afternoon, and send you an email letting you know that you (and your choice of +1) are on the list for Thursday's show.